A robot ate out the stairs that pilgrims will ascend (of course they ascend — certain myths endure better than others). The metals alloys are designed to absorb thermal changes and use that energy to drive the mechanism, if no people happen to come by for some time. There are cutting-edge ceramics, thought to be long-lived.

I love the 10,000 Year Clock. I’ve loved it since I first read about it in a ragged copy of Wired I found in my local library in 1998. That article is still available. So is this piece by Danny Hillis. Can you imagine! It’s from before there were blogs. It used to be called the Clock of the Long Now.

I love the clock because it makes me think big thoughts, the way that Voyager does. Can you imagine! 33 years. They are nearly at the edge of the solar system. Listen to the NASA press release. It is shamanic.

“There is one time we are going to cross that frontier, and this is the first sign it is upon us,” said Tom Krimigis… 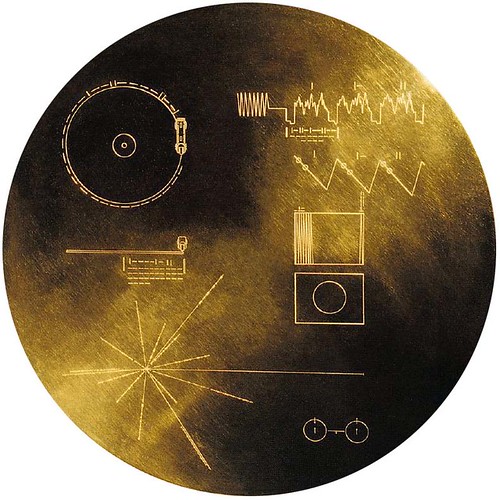 NASA understands the monumental significance of these tiny ungainly spacecraft.

DID YOU KNOW?
A total of 11,000 workyears was devoted to the Voyager project through the Neptune encounter. This is equivalent to one-third the amount of effort estimated to complete the great pyramid at Giza to King Cheops.

We are NASA, kings of kings:
Listen for our transmissions, ye Mighty, and despair.

The problem of monuments is longevity. The makers of the 10,000 Year Clock have studied this problem. They considered a shrine, possibly 2,000 years old, that is rebuilt every 20 years. They considered the problem of looters and the empty pyramids at Giza. Recently, we found 17 new (old) pyramids. We intend to loot them.

On the Clock’s website you can sign up for notification when the clock is done and ready for visitors. I wonder if I will still be using the address I gave them when that happens.