Chariot of the Gods is a movie about monuments that is itself a monument to the worst kind of temporal myopia. You’ve probably heard of it, or at least the argument that it makes. The logic goes ike this:

We are in “darkest Africa” where people live among the ruins of a lost civilization. “What masons trimmed and piled these stones with such astonishing perfection?” asks the narrator, “Were they the ancestors of these bushmen, whose straw huts surround the ruins?”

The answer is clearly meant to be, “No, they are clearly too primitive and stupid even today to have ever known how to build these walls.” The entire movies goes on like this. It’s historical chauvinism with a touch of racism to complete the outfit. “We’re so smart and we can’t figure it out, so there’s not way they could have.”

As if knowledge is a steady accumulation, rather than an eternal process of learning and forgetting. As if there wasn’t the possibility that maybe they came up with a solution we haven’t thought about. As if the speculative work of a few dozen archaeologists was a match for turning the best minds of your civilization to the problem of moving stone in new and innovative ways.

Our fiction is not much better. I’m sick of reading stories about an ancient society of elves or dwarves who have been around for more than 50,000 years who are still throwing around hammers and arrows. That’s 5 times the length of recorded human history. They should have — well, I don’t know what they should have because that’s such an absurdly long period of time. If we got to jet planes and space flight in 10,000 years, there should be an intergalactic council of second breakfasts in Tolkien’s world.

By the way, here’s a guy who turned his head to the problem and figured out a way to raise Stone Henge (that other great symbol of alien architecture) all on his own.

I chose the 46:00 minute mark of Chariot of the Gods because, for all that I hate the narration, the image itself is haunting. A person, nearly naked, stands dwarfed by ancient stone walls. (The movie says they are thousands of years old — try hundreds.) It’s such a melancholic moment.

I used to try to imagine what that would be like, to live among ruins that your culture no longer knew how to build. By extension, if our civilization were to collapse, what it would feel like to be our descendants, living among the ruins of skyscrapers.

It took me awhile to work out that we already know the answer. We’re doing it right now. Humans already live among the ruins of grand ancient civilizations and it doesn’t bother us. They’re tourist destinations. 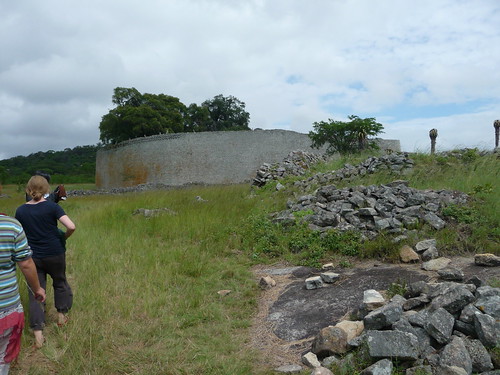 For tonight, we dig into the archives to discuss slow apocalypses. I draw your attention specifically to the middle history of the Coliseum. 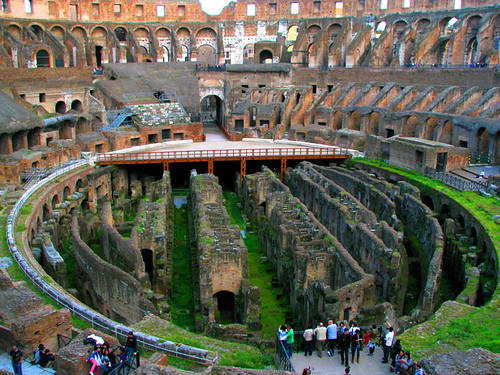 “We picked our way along, hurrying through the broken terrain of the concrete desert. Angea was first to speak, ‘How did they live like this?’ ”

Ruins are a staple of fantasy writing. Ancient halls under the ground, dungeons which house dragons, crypts and tombs of untold riches. Built by long lost civilizations, abandoned, forgotten and waiting for bands of enterprising heroes to stumble through, slaughter the local fauna and cart off the treasures. 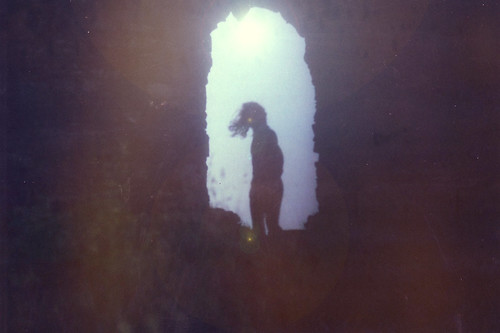 And oh, what treasures they find. The artefacts of ancient civilizations are remarkably durable. Which, OK yes, it’s fantasy and they are literally magical things. But there is an interesting story to be extracted about a material culture that can disappear but leave behind works of enduring value that boot up and are useable right out of the crypt.

It’s a trick we haven’t learnt, and if current trends hold, we are unlikely to learn. Our stuff wears out, breaks down and often depends on a networked web of infrastructure to function at all. Consider Mammoth’s excellent preliminary atlas of gizmo landscapes. Consider the gap in the digital record.

A modification of Arthur C. Clarke’s third law suggests itself. Any sufficiently advanced technology is indistinguishable from magic if it still works.

Assuming that civilization as we know it will collapse, build a device to astound future archaeologists/adventurers/scavengers (or whatever they’ll call themselves).

The use case is something like this: Deep in some mine, pit, or tomb, 1,000 years hence, an explorer comes upon your device. With a minimum of fuss (some fuss is allowed, especially if it is voice-activation or arcane gestures) it springs to life. They play around with it for awhile (or shy away from it, if it seems to be cursed). They marvel at the wisdom and power of the lost ancients.

The requirements are as follows

I would like to run this as a contest but I do not have the means to judge such a thing. This is a whimsical idea that would require very hard-headed materials science to solve.