Trails of Light and Shadow

A few months ago, I saw David Benjamin of The Living give a lecture.

One of the projects covered was Amphibious Architecture, an installation of buoys in the East River with environmental sensors and LEDs that communicated the data the sensors were receiving. (Water quality, etc.) 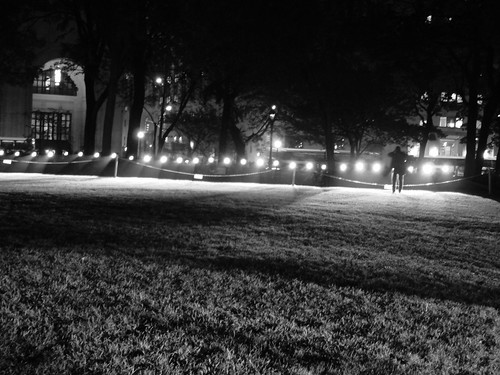 The coolest piece of the project was the motion sensors that detected fish as they swam by. As they passed through the matrix of buoys, their path was made visible above the surface by lights blinking out and back on. The public loved this element, Benjamin reported. Most people assumed that the river was so polluted that there weren’t any fish left at all. The visible indication of their presence changed residents’ attitudes toward the water.

In Toulouse, they also have a network of lights attached to sensors These are street lamps, erected as part of a trial for saving energy. By default, the streetlights are dimmed. Each one has a heat sensor which monitor the area. If it detects someone, the light brightens.

Imagine Toulose seen from above in real time, the path of its residents traced out by pulses of light. Some areas glow constantly, marking areas of vibrant nightlife. Other areas are calm, with the occasional single ripple of a lone traveller hurrying home down a darkened street. Imagine a map of Toulouse with corresponding LEDs, brightening and dimming in sync with their matching post.

Imagine the cinematic possibilities. A spy thriller in Toulouse. Our hero’s contact has been made and he is fleeing from the enemy. Everywhere he goes, his path is lit. Meanwhile, his assailants proceed methodically, their advance heralded by a glow that seems suffused with dread. Crane shots of the contact’s frantic path through a town square, the converging lights of the hit squad. Out of the darkness, our hero strikes. One by one the assailants are picked off without our hero’s path being lit. How? Dramatically, she opens her trenchcoat, revealing a skin-tight, black, heat suit.