I have become fascinated by the idea of yoking together two apparently quite disparate ideas in order to get more closely at a historical understanding of both cyborg technologies and medieval identity. One is the hypothesis made by Manfred Clynes and Nathan Kline in their seminal essay Cyborgs and Space (1960) that yoga and hypnosis are forms of cyborgian adaptation that might be used to promote survival in the alien environment of space. The other is a highly suggestive remark made by Myra Seaman in her article Becoming More (than) Human: Affective Posthumanisms, Past and Future (Journal of Narrative Theory 37.2 (2007): 246–275), namely that medieval people “examined and extended their selfhood through a blend of the embodied self with something seemingly external to it – not the products of scientific discovery, but Christ.” 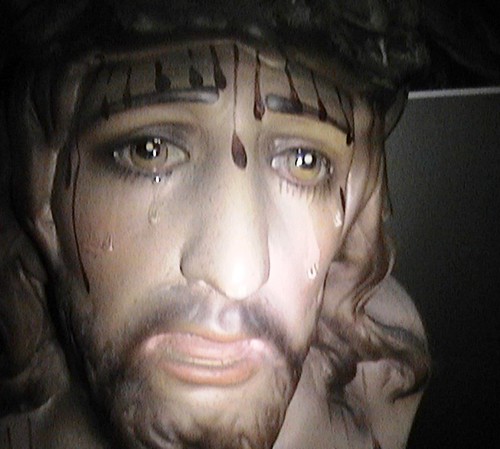 The medieval historian Caroline Walker Bynum asks, “Are we genes, bodies, brains, minds, experiences, memories, or souls?” (2001, 165), but this misses the point. We are all these things, but we are also – and always have been, according to the cognitive philosopher Andy Clark – more than these things. We are all these things plus the non-biological technologies (writing, computers, cellphones, Christ) that enable us to adapt to our changing environment and to better survive as humans: we are, in Clark’s words, “natural-born cyborgs” (and see further my essay: Our Cyborg Past: Medieval Artificial Memory as Mindware Upgrade, postmedieval: a journal of medieval cultural studies 1/2 (2010), 64–71). Think not so much of the woman with a cochlear implant as the woman sitting in Starbucks with an iPad – or (as I will develop here) the medieval Christian joining with Christ. 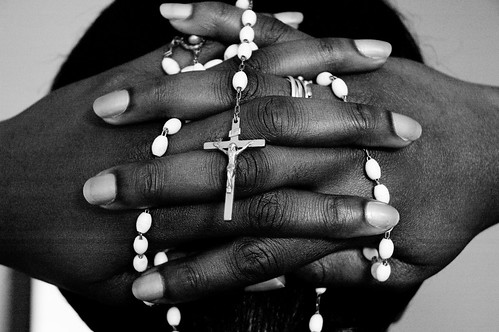 The medieval practice of mediation on images of the crucified Christ shares some affinities with the dissociative techniques of yoga and hypnosis that Clynes and Kline identify as having the potential to transform the body so that it can function as a “self-regulating man-machine system” in an alien environment. The medieval world was not of course space and it was not “non-natural,” but it was nevertheless a harsh environment. The repeated practice of monastic and private devotional meditation enabled an almost automatic (because habitual) uncoupling from the external environment. The locus classicus of this Christian ideal of negation is St Augustine’s imagining of a silence so complete that “the very soul grew silent to herself and by not thinking of self mounted beyond self,” a silence in which “He alone spoke to us … and if this could continue, and all other visions so different be quite taken away, and this one should so ravish and absorb and wrap the beholder in inward joys that his life should eternally be such as that one moment of understanding for which we had been sighing — would not this be: Enter Thou into the joy of Thy Lord?” The fourteenth-century anonymous English Cloud of Unknowing recommends a program of advanced spiritual exercises that are (with some important qualifications) the medieval equivalent of yoga or hypnosis: a divesting of the mind of all images and concepts through an encounter with a “nothing and a nowhere” that leads to mystical union with God.

Although The Cloud author argues that the follower of its method needs grace to complete the exercises — which isn’t quite what Clynes and Kline had in mind when they spoke of a regulatory mechanism that is automatic and unconscious – nevertheless the medieval model offers a way of overcoming the physical limitations of the body through dissociation. To see medieval ascetic practices such as fasting, meditation on the body of Christ, and contemplation as cyborg technologies is to see them differently: not as a rejection of the body and a privileging of the soul/mind, but as highly developed forms of distributed cognition that combine body, mind and external technologies in a continuous and semi-automatic feedback loop.