Back in January, Alexis Madrigal wrote a post called What History Can Bring to (Green) Technology.

It’s a broad thoughtful discussion of the philosophy of history disguised as worries about his upcoming book. I like the way it articulates the importance of sifting through the graveyard of evidence. All the lessons to be gained from the failed attempts. 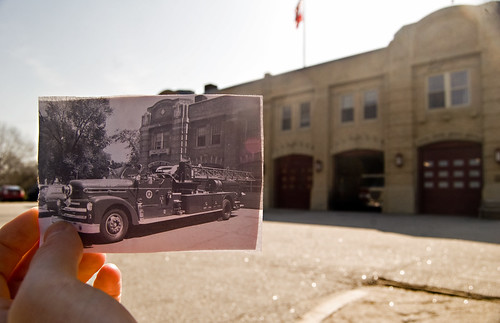 On the same day that I read the post, I watched Bruce Sterling’s keynote on atemporality. Have you seen it?

He stands in front of a slideshow of the Looking Into the Past Flickr set and explains that if after seeing those images you don’t get atemporality, then you won’t get it.

He talks about his usual theme: gothic high tech, favela chic, decay, and lifeboat economics. He discusses atemporality as a serene skepticism about the historical narrative. He throws out dozens of promising avenues of artistic and humanities research, it’s really quite inspiring.

And somewhere in there, he throws away a term that stuck with me about contemporary digital culture. A lot of it, he said, is “rag picking”. It’s loops and samples and quotation and so on. He talks approvingly about steampunk, atompunk, and all the other fiction around directions things could have gone, with a slight change a missing or an added event that makes one thing work out after all.

I feel like rag-picking is a lot of my project and a lot of the projects of the best people who I’m interested in these days. Plumbing the discarded depths of the past, present, and future for clues and evidence. We learn a lot about the past by looking at their garbage. Shouldn’t we be learning about the present and future that way too?

So when I read Madrigal talking about needing to examine the detours and off ramps of history I think, “Yes! Exactly!” and then Sterling talks rag picking and it resonates.

Have you ever wondered how fragile history is? How contingent? Is what happened perpetually on the knife edge of one accident or another, or is it all very robust, would it have all happened anyway, give or take some statistical noise in minor events?

On the fragile hand we have all the narrowly missed assassination attempts and Back to the Future. For the case of robustness, we have the many stories of close-call duplicate patentings and parallel scientific discoveries. But hold on! Who is to say that the death of Hitler would have halted the Third Reich? And what makes us so sure that the world born of Bell’s telephone company would be in any way similar to one born of Gray’s?

This is an important question because it has a natural corollary about the fragility of the future.

Steampunk and Atompunk and all the cacophonous children of cyberpunk seem to come down squarely on the side of contingency. If only Babbage’s work had been fully funded, say the Steampunks, the information age might have been ushered in a century earlier. They see in the proto-cybernetic governors and pneumatic tubes the seeds of a future that could have germinated earlier.

But before we get too excited, consider this subtle little dig from the Steampunk entry on Wikipedia: “these frequently are presented in an idealized light, or with a presumption of functionality.”