On June 5, Newsweek’s Julia Baird published an op-ed entitled The Front Line Is Online. In her subhead, she declares that “freedom should trump privacy.”

She spends some time reliving Neda Soltan’s death and some time talking about the growing consensus that access to the Internet should be a fundamental right. What follows is some depressingly muddy thinking about how to proceed. 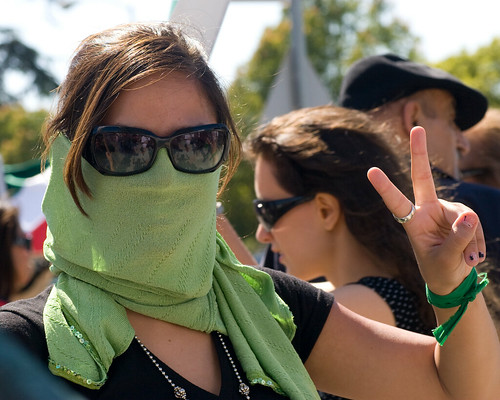 One in seven of those who do not use the Internet think they should have the right to if they want. Yet only half of those surveyed felt the Internet was a safe place to express their opinions, and more than half thought that it should never be regulated by the government. Which may suggest that some people are willing to accept some compromises to privacy to avoid the creeping censorship that too easily follows government intervention. The basic tenet of the Internet is openness: you don’t need to forfeit all privacy, but if you want to protect it, don’t post publicly.

The debate about quitting Facebook certainly takes on a different hue when exposure, not secrecy, becomes the critical fight. In the past few weeks, both Pakistan and Bangladesh shut down Facebook in response to the group Everybody Draw Mohammed Day, because it is considered blasphemous to create images of the prophet. Facebook has been slammed by clerics in Egypt and Syria for being a gateway to adultery; and a woman was shot in Saudi Arabia after her father discovered her chatting online with a man she met on the site.

Baird sets up a false opposition between freedom and privacy, and then undermines the argument with her own evidence. The key insight missing is that privacy isn’t in conflict with freedom, it’s a component of it.

Most liberal democracies have a whole pile of rights that recognize this. It’s the freedom from unreasonable search and seizure. It’s why the government can’t read our mail in most free countries. It’s why we get so upset when we learn that we’re getting wire-tapped.

When “if you want to protect it, don’t post publicly” holds sway, the woman in Baird’s last example has two choices: get shot for chatting with men or don’t talk to men at all. That’s not freedom. The thing that could have freed her from her father’s insane grip is secrecy; she lives and is free only insofar as she is able to keep her private life away from his murderous attention.

A world where you can’t keep your list of friends hidden is a world where governments can figure out networks of dissidents. psychotic family members can find out you are talking to the wrong people, and the police know which door to kick in. Removing censorship makes posting easier — it doesn’t make it safer. Shielding from prying eyes does. That only happens with good, reliable privacy controls.

To have real freedom, we need both.