I’ve had a couple of great conversations today deriving from the BBC’s sensationalist First human ‘infected with computer virus’ headline. 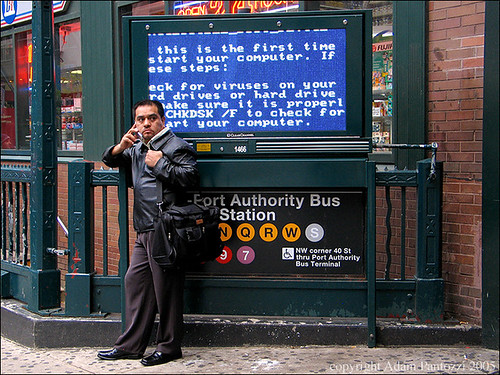 Why do I say sensationalist? Adam Rothstein of the Interdome explains it best.

William Gibson used the term “Tabloid Science” the other day on Twitter, and this couldn’t be a better example (unless it also threatened to increase global warming, discover aliens, and involved robots becoming self-aware).

This story is, as I understand it, about a guy who figured out how to transmit a computer virus using RFID. And yet, we have this all-star headline, reposted everywhere from the BBC to Slashdot. It’s reminiscent of the back pages of popular science magazines (“enslave ants to grow all your woman-attractive pheromones, now only $2.99!”) except this is now science reporting, on the Internet: a domain supposedly rational and free of all that “headline” crap.

From the perspective of the systems being compromised, there is no difference between an RFID attacker that’s moving around the world inside someone’s skin or on top of it. There’s no benefit to doing the implant part of the procedure except that it gets you headlines. Which, I guess, is a pretty big benefit.

There’s something hilariously hair-splitting about how a variation in placement of just a few millimeters — fundamentally cosmetic — makes all the difference in coverage. Malware RFID has been around for years. Here’s the BBC covering it in 2006.

We might be better off conceiving of Dr Gasson’s move as a sort of performance art intervention in the mediasphere.

Why? I have a much deeper and more integrated relationship with my smartphone than Gasson has with a chip that stays in his body for a few days. It’s like saying that someone with cheap earrings is the first human to rust.

Indeed, the chip as worn by Gasson is substantially less useful than if he’d just stuffed it in his pocket (aside from the “getting media coverage” utility, which we must not dismiss). For one thing, the one in his pocket can be thrown down the sewer when security notices him.

It reminds me of the perennial prediction that cellphone implants are imminent. No they aren’t. Cellphone contracts last 2–3 years and new phones come out even more frequently. Say what you will about the stuff that’s carried on you instead of in you, but at least it’s modular.

For it to be worth accepting implants, they have to offer significant benefits that carry-able items don’t. Medical prosthetics are one obvious category of this kind of thing (though even most of these are things that you wear). Devices or interfaces that give you new senses might be another.

Kevin Warwick’s Project Cyborg 2.0 is relevant here. Implants connected to his nerves allowed him to control a robot arm remotely and to exchange sensations with his wife wirelessly through a rig she also had implanted.

Moving away from hard realities of the current achievement, let’s take for granted for a moment that there will be abilities and senses worth having surgery for. Let’s allow for people with networked nervous systems, reaching far out beyond themselves to a whole host of new conveniences for the modern consumer. I’m thinking about flexible ego boundaries and an artist who replicates Marina Abramović’s Rhythm 0, 1974 for the cyborg era.

In Rhythm 0, 2014 (2024?) the artist turns off her firewalls and publishes her personal IP and secret key. She is almost immediately compromised by the sea of ambient malware that’s just part of the background Internet. The participant/audience of the performance swoop in and begin a battle to take over and clean her system, while others attempt to reroute it for themselves.

The artist’s body goes haywire. She sometimes shouts the names of consumer pharmaceuticals along with other gibberish. She begins to develop a fever as all of her microcontrollers run at full tilt, generating dangerous amounts of heat. After an hour, her assistant intervenes. Her firmware must be wiped and restored. A great debate erupts in the art world about whether this is a success or a failure of the piece.

The debate is part of the performance.

I leave you with these words from Simon Bostock who pointed me to the BBC article in the first place.

I’m pretty sure the best depiction of flexible ego boundaries I’ve read is Vernor Vinge’s A Deepness in the Sky, which, if you can get over the fact it’s a space opera about pirates using enforced-autism as a method of slavery and a war between a race of giant spiders, shows how we’ll probably accrete layers of tech and cyborg accoutrements until we all become reefs.

If we’re going to manage our future selves we’ll all have to get a grasp on what topology means.