There is an arms race in progress between humans and bacteria. It started in earnest just before World War 1 with Salvarsan and really got going during World War 2 with the wide-spread use of Penicillin. In response to human aggression, resistant strains of bacteria evolved. Superbugs. 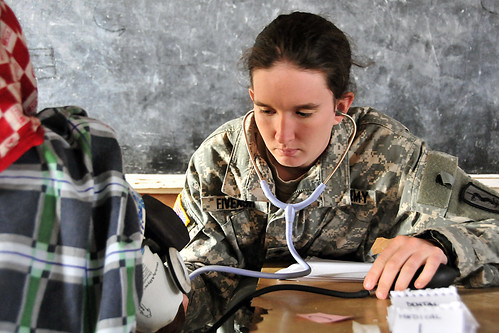 Methicillin-resistant Staphylococcus aureus is the current star child. Harmless when carried on the skin, it gets into the body through wounds and then it kills. It accounts for 19,000 deaths per year in the U.S. (compare to about 17,000 from AIDS). It’s doing much better than its less resistant brethren. MRSA accounted for 2% of of staph infections in the U.S. in 1974. In 2004, it was 63%. MRSA thrives in hospitals.

In 1980, when MRSA started to appear among the fjords, Norway responded aggressively… by cutting antibiotic use, and by stepping up the tracking and quarantine of the strains they found. The stunning result is encapsulated in that number. Even more stunning: old drugs are still useful in Norway.

Haug unlocks the dispensary, a small room lined with boxes of pills, bottles of syrups and tubes of ointment. What’s here? Medicines considered obsolete in many developed countries. What’s not? Some of the newest, most expensive antibiotics, which aren’t even registered for use in Norway, “because if we have them here, doctors will use them,” he says.

He points to an antibiotic. “If I treated someone with an infection in Spain with this penicillin I would probably be thrown in jail,” he says, “and rightly so because it’s useless there.”

When the rest of us went to war trying to wipe out infections entirely, the Norwegians forged an uneasy truce. They intentionally deny themselves access to the latest infection-fighting technology. They suffer through colds and other minor illnesses, essentially letting the bacteria run rampant (Tylenol is used to control the symptoms rather than the disease and infected individuals are sent home and paid to stay there). In life-threatening situations, the big guns come out and antibiotics keep the staph at bay. It works because there is no evolved resistance. The staph gets to live day to day, so we get to live in the emergency room.

Norway’s biggest problem is that the rest of the world didn’t follow suit. Most Norwegian cases of MRSA are people who travelled to foreign soil, got infected, and came home. The resulting picture is of this island of sanity, doomed to be overwhelmed by everyone else’s poor decisions about antibiotics. Which brings me to the next twist the article: Norway’s success can be replicated.

I’d assumed that increasingly resistant strains of bacteria was a one-way trip, a monster that once we’d created we could not contain. But bacteria strains are competing amongst themselves all the time. The cost of being antibiotic-resistant might mean giving up advantages in other areas to non-resistant strains. Stop grinding the population under your medicinal heel, and the more benign strains take care of MRSA for you. Imagine! You can turn back the clock and calm staph infections to a dull roar.

Years ago, I saw an evolutionary microbiologist speak to the same idea around the AIDS virus. He’d done work tracing strains in sex-tourist-heavy Thailand and more chaste Japan and found that in Thailand, HIV was more virulent. It killed people faster. It could afford to, because the transmission rates were so high. In Japan, the incubation period was longer. It had to be — there were less opportunities to transmit. When Japanese sex tourists returned from Thailand infected with the high virulence HIV, those strains evolved toward longer incubation periods.

He ended the talk by suggesting that programs to reduce transmission rates could have a multiplicative effect. Not only would there be less AIDS but what HIV there was would be more benign. If, as you read this, you are thinking about William Gibson’s J.D. Shapely, you are not alone.

Every arms escalation is a race to the bottom. Each side has to invest more and more resources to end up at an equilibrium. The result is an exhausting and increasingly high stakes game of chicken.

The parallels between the military-industrial arms race and the bacterial arms race are as suggestive as they are obvious. Imagine a medicinal START 1 limiting the power and use of antibiotics. “If we have them here, doctors will use them.” Imagine a global treaty that steps us away from high alert and in turn domesticates our adversaries. Imagine a global détente with staph infections. They think their demands are being met, so they kill off their extremists. Secretly, we still have nukes.

It is worth emphasizing that there is a real trade-off at play. Norwegians are getting sick more often and are suffering through these minor illnesses for longer than the rest of us. It’s a national investment on their part in catastrophe insurance. Norway allows slack in the system by distributing the quality of life cost to individuals and spreading the income loss across the collective. Small inefficiencies are accepted and absorbed. In return, Norway gets evolutionarily complacent, easily controlled, staph.

In America, if you get sick and stay home, you generally lose your pay. So you go in and make other people sick, or you take antibiotics and then go in. In return, America gets efficient, survivalist, killer staph. We get to work more and companies don’t have to pay people who aren’t contributing day today. But when things go wrong for us, they go really wrong.

I can’t help but think about the financial crisis and the problem of over-optimization that I wrote about in 2008. The banks that were most successful in the lead-up to the crash fell hard, while the ones that were merely profit generating (instead of profit maximizing) survived without a bailout. When things were going right, the most profitable banks optimized slack out of the system. When things went wrong, they went really wrong.

From a cybernetic perspective, this is a story of feedback and control. Domesticating and controlling a belligerent element by drawing it into a system.

Consider the parallels to asymmetric warfare. This is a variation of the hearts and minds strategy. It’s the hope that we’ll be greeted as liberators. It’s paying the enemy to switch sides. It’s drones watching targets for days, waiting for minimal collateral casualties before firing.

This summer the new U. S. commander in Afghanistan, General Stanley McChrystal, further restricted air strikes and ordered troops to withdraw from a fight in which they were being fired on from civilian areas — better to let enemy fighters slip away than risk alienating a village, or the whole country. This push to cut civilian casualties has only increased the military’s reliance on UAVs.

From: We’ve Seen the Future, and It’s Unmanned by Brian Mockenhaupt

What if the widely derided security theatre at airports is a form of terrorist domestication? If you can hijack a plane with box-cutters maybe you don’t bother learning to do much else. Maybe your superiors send disposable idiots instead of highly trained assassins. Maybe the highly trained commandos get stuck in the mountains or sent to Mumbai.

I leave it as an exercise for the reader to apply the same lines of analogy to the War on Drugs.