In a recent column, CBC’s Ira Basen contrasts the protection and access granted to journalists in the past…

If I was covering a war, people were less likely to shoot at me if they knew I was a journalist. If I was captured while covering that war, the Geneva Convention stipulated that I be treated as a prisoner of war, not as a spy. 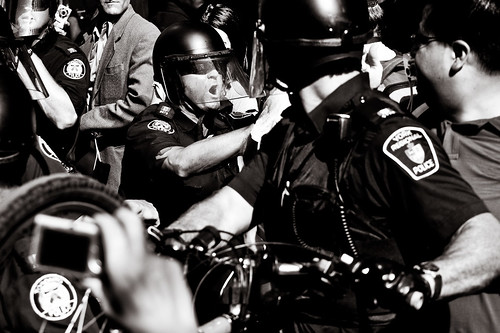 …to the confusing present…

Perhaps the best way of understanding police behaviour at this juncture is to recognize that almost everyone in that crowd had some sort of camera-equipped mobile device, which meant that, in the minds of the police, almost everyone was a potential journalist.

That meant they could either give special treatment to everyone or to no one. They chose no one. 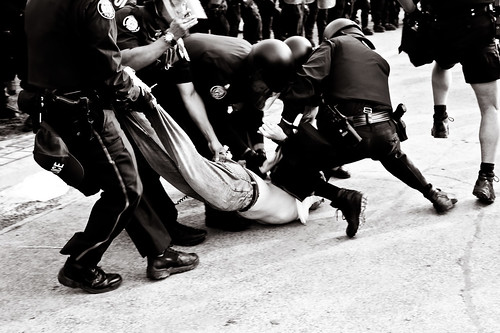 …leading to an inescapable conclusion.

He ends there, before taking this line of reasoning all the way to its terrifying conclusion.

In Fast Cheap and Out of Control: A Robot Invasion of the Solar System, authors Rodney Brooks and Anita Flynn argue for a different approach to exploring the immediate planetary neighbourhood. Rather than following the usual approach of planning expensive high quality missions which, when they fail, fail catastrophically, Brooks and Flynn argue for a scattered approach. They propose swarms of low quality cheap redundant components. The benefit is that you can lose some — even many — of them without compromising the mission’s goals.

There are major problems with planning a space mission which relies solely on one large planetary rover. If a mission is restricted to such a single large robot, there is a tremendous cost associated with losing the rover and thus a rash of conservatism will develop among the mission planners.

Rodney Brooks & Anita Flynn Fast Cheap and Out of Control: A Robot Invasion of the Solar System [PDF]

They propose a variety of models where cheap simple robots are launched — robots that mission planners can afford to lose. The first thing Brooks and Flynn consider is machines that relay back TV images.

In the wake of the G20 protests and riots in Toronto, Torontoist collects The Fourteen Essential G20 Videos. They are a mix of shots by professional film crews and people with cellphones. Only one shows any kind of serious editing. For some of the videos, links to alternate shots of the same incident are included in the commentary. Many more are suggested in the comments. 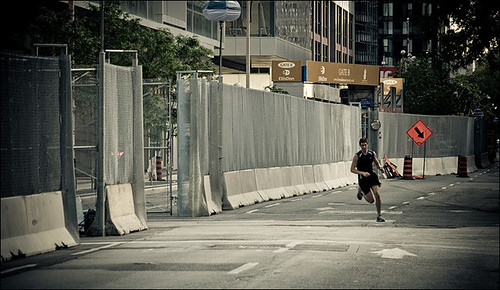 When it comes to surveillance, there are two basic problems. One is not having enough information. The other is having too much information — the unspoken fourth corner of Rumsfeld’s formulation.

The first problem is relatively easy to solve. If you don’t know enough, you can throw resources at your objective. You can develop new tech, hire new people, and deploy new methods. It’s also, from an intelligence gathering agency’s perspective, a pretty good problem to have. It means you get to go to the budget committee and ask for more money.

Having unknown knowns is a harder problem, politically. It means that buried somewhere in the apparatus is information that, if you had it to hand, would be extremely useful. But you don’t. Instead, this information has a bad habit of turning up after the fact, and you find yourself in the uncomfortable position of explaining document titles like “Bin Laden determined to attack inside the U.S.” at a hearing.

The key in this circumstance is no longer information gathering, it’s information filtering.

I’ve been talking about the Toronto G20 protests because they happened recently and they’ve been on my mind. But there’s nothing special about the event. This is the mass-collaboration and content creation that we get so excited about. This is Wikipedia, Google, Twitter, Lolcats, 4Chan, YTMND, Yelp, Slashdot, StumbleUpon, SETI@HOME.

If SETI@HOME ever succeeds, we’re going to want to know who “found” the signs. Reporters will track down which computer processed the patch of sky where the alien signals came from. They’ll compose feature stories full of little charming details about the owner of the computer, his or her family, house, and habits. It’ll start with something like, “So-and-so doesn’t seem like an ordinary such-and-such…”

The joke will be that whoever this is will have contributed exactly as much to the effort as any of the random people whose computers determined where the aliens weren’t.

Think carefully about the right that Basen claims. The right to not be shot or beaten while all around you people are being shot or beaten. This is literally the status of privileged observer. Precious observer, that must be protected because there are so few of them and they are so badly needed.

The bargain was roughly thus, “We know you are going to tell a story, and we want our side of the story to be told, so if we avoid shooting at you and yours, perhaps you’ll be less inclined to tell it badly.” 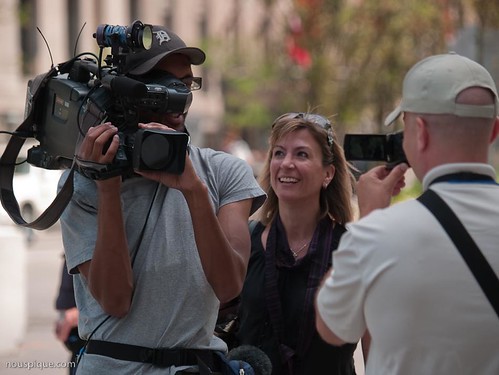 Had any of the fourteen essential videos been prevented from making it to the Internet, understudies fifteen through five thousand were waiting in the wings.

For all the cameras, no one appears to have recorded the arrest and beating of journalist Jesse Rosenfeld. For instance.