After The Last Viridian Note

As I begin writing this, I’m sitting in a room that consists of an old mattress, some empty shelves and a closet stuffed with boxes — my bedroom on the eve of a move. I finished (and started) packing yesterday. This is a feat that probably makes me unrecognizable to friends who showed up on my doorstep 5 or 10 years ago to find me franticly dumping drawers into garbage bags on moving day.

Lately, I have this ritual when I move — I read Bruce Sterling’s Last Viridian Note. I’m treating it like a devotional text for the comfortably mobile. It helps me refocus my attention on my material conditions, giving me the right kind of steely-eyed attitude when it comes time to ask, “Do I really want to pack this?” 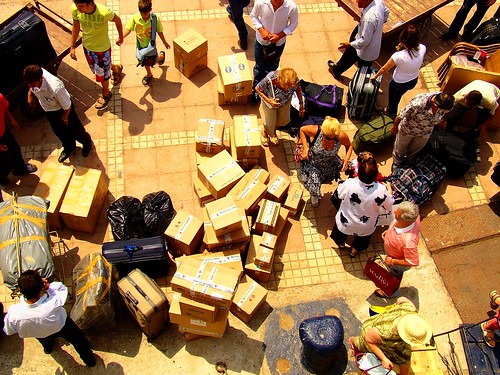 My design book SHAPING THINGS, which is very Viridian without coughing up that fact in a hairball, talks a lot about material objects as frozen social relationships within space and time. This conceptual approach may sound peculiar and alien, but it can be re-phrased in a simpler way.

What is “sustainability?” Sustainable practices navigate successfully through time and space, while others crack up and vanish. So basically, the sustainable is about time – time and space. You need to re-think your relationship to material possessions in terms of things that occupy your time. The things that are physically closest to you. Time and space.

In earlier, less technically advanced eras, this approach would have been far-fetched. Material goods were inherently difficult to produce, find, and ship. They were rare and precious. They were closely associated with social prestige. Without important material signifiers such as wedding china, family silver, portraits, a coach-house, a trousseau and so forth, you were advertising your lack of substance to your neighbours. If you failed to surround yourself with a thick material barrier, you were inviting social abuse and possible police suspicion. So it made pragmatic sense to cling to heirlooms, renew all major purchases promptly, and visibly keep up with the Joneses.

That era is dying. It’s not only dying, but the assumptions behind that form of material culture are very dangerous. These objects can no longer protect you from want, from humiliation – in fact they are causes of humiliation, as anyone with a McMansion crammed with Chinese-made goods and an unsellable SUV has now learned at great cost.

Furthermore, many of these objects can damage you personally. The hours you waste stumbling over your piled debris, picking, washing, storing, re-storing, those are hours and spaces that you will never get back in a mortal lifetime. Basically, you have to curate these goods: heat them, cool them, protect them from humidity and vermin. Every moment you devote to them is lost to your children, your friends, your society, yourself.

Sterling wrote this in late 2008, which was probably exactly when I needed to hear it (I’ve moved 3 times since then which is why I can claim the re-readings are a ritual).

In 2007, I was engaged to be married. We shared an apartment in Toronto that was brimming with stuff, most of it in boxes. After she moved up, her parents had kindly filled a truck with everything she owned and driven it from Nova Scotia. This act of kindness turned out to be a blow from which our material living conditions never recovered.

I already had a bad habit of moving unopened boxes from apartment to apartment; with her stuff added in, it became overwhelming. Both of us worked long hours, both of us meant to get around to sorting through our stuff but progress was slow to non-existent. We lived among boxes. Boxes became furniture. Boxes shaped our pathways through the space.

When we broke up, I’d just gotten back from a 2 week trip to Montréal. I had a suitcase with clothes and a backpack with my laptop and gear. She met me at the station, we went home, she explained her decision, and I walked back out the door carrying the same luggage.

I stayed on the road for 3 months, visiting friends across the country, living out of the suitcase and backpack. I could barely remember what was in the apartment. When the lease expired, I packed it all up, gave away what I could bear, and put the rest in storage. I moved to Ottawa. I was 6 months in to my 2 week trip when I read The Last Viridian Note.

I tell you all of this not to herald a sudden shift from cyborgs to feelings on this website but to establish some context and qualifications for this next bit. I’ve tried to varying degrees of success to follow the advice that made sense in Sterling’s sermon. I’m very glad to have gone through the exercise. I’ve learned from the experience.

I found that a surprising amount of what you own is hard to get rid of, but easy to live without. I remember very clearly in 2008 agonizing over what to toss and what to put into storage. Today, I’m paying for a locker with only the dimmest memory of what’s in there. I don’t remember at all what I gave away, though I remember very clearly being wracked with indecision about whether I should get rid of whatever it was.

This condition does not seem to have a cure. On the day of the move itself, I set aside two bags of clothes to donate. Included in this pile were some very nice jackets that I had never worn (they were hand-me-overs) and could not foresee myself ever wanting to wear. Yet as we finished for the day aside from a last stop at the drop-off box, I hesitated. What if? What if one day I wanted a jacket like that? They were perfectly good jackets. It took real mental effort to stay the course. Sterling warns that the process will be painful and he’s not wrong.

The sermon focuses very much on the individual. It’s a program for how you might clean up and de-clutter your own life. One area that’s left aside is how this attitude fits into a slightly larger context (he skips straight to the largest context — the condition of the planet). It’s reasonable to ask: how might this approach scale?

Over the past two years I’ve learned over and over how much the highly mobile rely on the stationary for support. I’ve benefitted from countless roommates and hosts who already owned the things needed to maintain a working household. Dishes, for example. If I have been able to move without filling a van, it is because I have lived with people who needed a truck. If I hadn’t had friends, I’d have needed hotels.

(One of my favourite interviews of all time has Joey Comeau and Ryan North discussing this exact thing. Read it here.)

When I was in university, I went to a school that was walking distance from the house that we’d lived in since I was 2. The basement was full of stuff. Quite a few of my friends were from away, and my parents’ basement became this warehouse of resources for the whole community. Need something sawed? We had that. Need extension cords and a hose? We had that too. Need 16mm film of a wedding from the 50s, along with a working projector for your play? Yup.

This basement of miscellany sustained the material needs of about 20 university students for various projects. When my parents moved out and got rid of everything (to their great relief), a resource was lost. There is a value to having things to hand. I only need one of my friends to have a bike repair stand, but boy am I glad that he does.

There is a whole category of objects like this that don’t quite fit into the Beautiful things / Emotionally important things / Tools, devices, and appliances that efficiently perform a useful function / Everything else rubric that Sterling details. One of his criteria for “everything else” is stuff that you haven’t touched in a year. These are very likely things you can toss, but some of them only make sense to toss in a certain context.

There are items that have some critical density of need that is not one per person, but one per household, one per block, or one per neighbourhood. They might be items that you use less than once per year but that your neighbourhood would use in aggregate once every few weeks. This is a coordination problem. I can give away my extension ladder, if you promise to keep yours or vice versa, but between the two of us, we do want a ladder. (This problem is extra persistent with roommates and is how I’ve managed to go 2 years without owning dishes or living room furniture. How many toasters does a household need? Probably 1. Mine has 3.)

In tightly knit communities, these objects can get where they’re needed through informal lending networks. But how to get them into the hands of our glocally situated young professionals who have more connections across the continent then in a 5 block radius?

We might take some inspiration from the smooth rental experience of Zipcars. The cars are just around. You don’t need to plan ahead, you just need to see if one’s available (it probably is). There aren’t forms to fill out in triplicate, heck, you don’t even need to talk to anyone. You can just go and pick it up as if it was yours and put it back when you’re done.

We might also take some inspiration from DIY bike collectives such as Toronto’s Bike Pirates. They have all the tools, even the ones that you need once per bike’s lifetime. You drop in, do some work, leave a donation, and go on your way.

Toy Libraries also show some promise. Many toys expire long before they go bad. They become boring. They are grown out of. Libraries keep them in circulation and out of people’s basements.

With the rise of cheap sensors and cheap ID tags, it’s not hard to imagine lending libraries for all kinds of specialized tools and objects. Think about how much stuff you would get rid of if you felt like you could just grab another one any old time. No need to stop at simple tools, much of what was useful about my parents’ basement was dross that was occasionally extremely useful. Imagine whole emporiums of wonder and miscellany. Think about how much you’d enjoy browsing these places, every shelf stuffed with the intriguing scraps of a project idea.

Hold on! Now we’ve just outsourced the curation and maintenance of our occasionally useful junk to some hapless individual or organization. How do you make a set up like that sustainable? Is it run for profit? Can networks of data tags make the system seamless enough that the curation duties can be distributed across the userbase, much as they are in a regular neighbourhood? These are real design problems that want useable solutions.