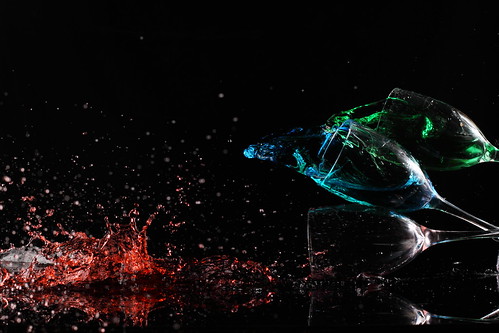 Christine didn’t notice right away. She had her headphones on and so could not register the sudden silence. She did notice that the taps weren’t working but assumed that this was due to a problem with the plumbing. She was wearing her watch, so it continued to run, so, when she checked it, she (wrongly) believed that she was late for work. She noticed that the door did not swing shut behind her, but assumed that this was because it was stuck. She was a little surprised that it closed easily when she pulled at it. She did notice Mr. Thomson at his door, but he was old and slow anyway, so she did not realize that he was frozen in place as she hurried past on her way to the elevator. She did notice that the elevator was broken but assumed mechanical failure. She did not notice the door failing to close behind her as she took the emergency stairs two at a time. Nor did she acknowledge the security guard frozen at his station on the main floor.

She couldn’t help but notice the traffic.

Three lanes in each direction, completely frozen in space. Cars and busses, SUVs, some enormous trucks and, in the far lane, a VW Microbus covered in psychedelic graffiti. Commuters, most of them. The Microbus contained a 60s revival band, though Christine did not know this. There was a bike lane, too. Not far to her right was a cyclist, bent over his handlebars, intent on the road, wearing Lance Armstrong Yellow. The word ‘statuesque’ drifted through her mind.

She approached him carefully. He was wearing a helmet but no sunglasses so she could see that his eyes were intensely blue. He looked like a VR photograph. She thought about The Matrix. She thought about the Holodeck on Star Trek.

She walked around the cyclist once. He was wearing typical biking clothing — he wasn’t a commuter. She wondered if he was a courier. He had one of those bags, but so did all of her friends and they weren’t couriers. She stopped in front and stared into his eyes. They were focused on something beyond her, probably the next intersection. She leaned in for a closer look.

And he slammed into her. More to the point, his bike did. They collapsed together in a tangle of spokes and frame and limbs and chain. It hurt a lot and it took both of them a moment to regain their breath. She had already picked herself up by the time he’d begun to speak. He looked furious so she started to back away.

Christine was puzzled. She was beginning to understand that Something Serious was happening. She stepped toward the cyclist.

“-e fu-” he continued and Christine was so startled that she jumped back and he was frozen again. She circled around behind him and moved in close.

“-ck!” he finished. And stopped because, from his point of view, she’d disappeared.

“Boo!” she said. So he hopped away from her, tripping on his bike and flailing forward.

She left him there, frozen in mid-fall, his arms sprawled and his face aimed toward the sprockets. After a moment’s consideration, she pulled the bike away, holding on to the far end, thinking that it would be better to land on tarmack than on pointy metal bits.

She found a bench and sat down to consider her next move. There was no question now that Something Was Up. Deciding on a course of action was paramount. Her ears felt hot, so she took her headphones off. It was at this point that the silence registered.

The silence was deafening. Consider that she’d lived in her apartment for three years. Consider that, for three years, every morning she’d come out the front door to the roar of traffic. Consider that under the roar of traffic was the sound of conversations and radios. Under the conversations and radios was the patter of feet. Under the footsteps was the whistling of the wind between skyscrapers. Under the wind was the hum of electric wires and neon lights. Under the hum was the low rumble of subways and the burbling of the sewers. Under the subways and sewers was the distant sound of waves lapping on the lakeshore. And there were doors slamming and rats nibbling and birds flapping and calling and bugs buzzing and windows sliding and stomachs rumbling and papers folding and fans whirring and dust falling. Now none of that was happening.

Christine fought down panic and crammed her headphones back on. She fast-forwarded to her favourite track, closed her eyes and tried to pretend that none of this wasn’t happening. It didn’t work. There was a discarded coffee cup near her hand. She crumpled it up and hurled it toward the frozen traffic. It made it about four feet and then stopped, suspended in mid air.

The phrase ‘personal time field’ drifted through her mind. She thought about the letters.

They’d started arriving two years before. The author claimed to be her father. She’d never met her father, nor had she met the author. They were meticulously handwritten. Precise to the point where she’d wondered if they were computer printed, but they weren’t — Erin had shown her the pen strokes. Christine had shown all of the letters to Erin one evening, partly to get her opinion and partly to amuse her. The contents were crazy. Barely restrained rants about the scientific establishment, carefully worded comments about Christine’s mother, vague sweeping generalizations about time travel, quantum physics, south american mysticism, and strange sketched diagrams. Erin’s favourite part had been the diagrams.

They arrived every two months, like clockwork. The latest had arrived the night before and it had contained what the author referred to as: ‘The Talisman’. It had contained The Talisman and instructions to wear it today. She remembered the letter saying that it would provide her with a personal time field. She’d laughed and filed the letter away with the rest — she enjoyed them, though she did not believe them. She’d worn the talisman anyway, not because of any belief in the letters but because it matched her top and made a funny story.

She grabbed hold of the talisman and examined it. It was the same nice orange that contrasted with her olive tank top, though she could not tell if it was a trick of the light or memory that it seemed to sparkle more than when she’d put it on after coming out of the shower. She reached behind her neck and began to undo the clasp. It was the only way to be sure that the letters weren’t real.

She found herself unwilling to take the risk.