Soundtrack for a City

Listen, Jerry can you get Louisa on the line? I’ve got an idea here you kids don’t want to miss. This’ll be a use of your VC dollars that’s way better than that ridiculous gene therapy tech that Kurzweil sold you on.

Here’s the deal: It seems like all of the buzz for augmented reality is around layering images in real time over the world or a video feed of the world. That seems cool, but it’s all very new and pre-alpha and I feel like there has to be more to the AR stuff than just jittery lines and awkward French maids. In fact, I think that there is the tech for an app, RIGHT NOW that could provide a polished user experience using current-gen consumer devices. I’d like to pitch that product to you today. Now. 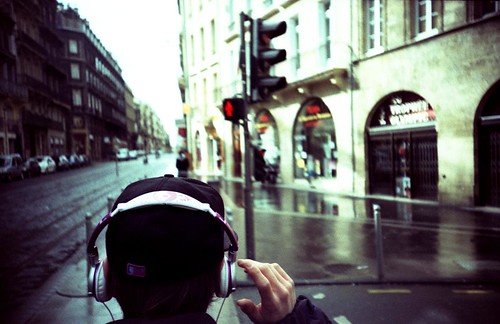 Here’s the background: On day 10 of Dustin Curtis’ 30 Day Flight he sits next to a retired Disney audio Imagineer. Calls him Mr Q. They have a conversation. In 1968 this Q guy designed the ambient audio system for Disney World. It was the first theme park that had music playing on the pathways between the rides. Over time it’s gotten more and more sophisticated.

He describes how he wrote some software for “manufacturing emotion” with the thousands of new speakers in the park. The system he built can slowly change the style of the music across a distance without the visitor noticing. As a person walks from Tomorrowland to Fantasyland, for example, each of the hundreds of speakers slowly fades in different melodies at different frequencies so that at any point you can stop and enjoy a fully accurate piece of music, but by the time you walk 400 feet, the entire song has changed and no one has noticed.

It’s a cool solution but it’s very 20th Century. Very infrastructural. It’s location dependent and expensive to reproduce. It asks everyone to hear the same thing. It doesn’t scale to the whole world.

Jer, you know smart phones. Smart phones are your own private amusement park. They have headphone jacks, they let us load apps, they let us play sounds, they are location aware. We don’t need to install speakers throughout the city, people carry the speakers in their pockets. They’re listening to playlists and podcasts and these really ancient “we-don’t-know-from-new-tech-so-we’re-just-filming-plays” primitive stuff. Pre-modern stuff. Audio walking tours? Please, that’s Walkman stuff. Press play when you reach this sign post, whatever. We can reproduce Mr Q’s tech and we don’t need to lay a single inch of cable, don’t need to bolt in a single sub-woofer. We just need to paint in the sounds.

Pick an launch market. Somewhere filled to the gills with creative types who have iPhones, Palms Pre, and Android handsets. New York? Toronto? London? San Francisco? Call up some big names or some up and comings soundscape artists. Is Brian Eno available? What about DJ Someone-I’ve-Never-Heard-Of? Someone the kids are in to.

There’s two parts to this thing. The client sits on the phone, downloads a soundtrack — custom for the city — pulls from the location API, and mixes sounds according to the instructions. There’s cleverness sure, some audio gee-whizery secret sauce, all very patentable and proprietary that seamlessly pulls it together. As you make your way from uptown to downtown, the tone shifts gradually, like in Mr Q’s park but moreso. Mr Q is strictly last century, he’s amateur hour hacker hobbyist. It’s laying copper when we could be putting up cell towers in Africa. Disney doesn’t know from happiest place on earth.

On the server — wait’ll to see what we’ve got going there — it’s all very user-friendly, very drag-n-drop. We show you a map of the city and your uploaded audio files. You can paint-in areas, just like Photoshop, in fact we’re using one of those 2.0 cloud-based painting apps as a base tool. Colour your regions and associate sounds accordingly. We crowdsourced the names of neighbourhoods from Flickr to give you suggested outlines, if you just wanna throw something together, but the real artist can paint down to the nearest half-meter.

Oh yeah, of course it’s all socially networked. We’ve got Facebook integration and a Twitter feed and you can rate soundtracks and see what your friends are listening to and we’ll make a recommendation engine or just leverage someone else’s.

Financial model? We’ve got a financial model like you wouldn’t believe. Licensing opportunities for bands, official city soundtracks for the burgs that care about that kind of thing, pay-per listen, downloadable in-app micro transactions, the whole thing. Disney needs to talk to US. Why are they wasting time on a single soundtrack for the happiest place on earth? Why aren’t they selling Little Mermaid downloads for the girls and Pirates of the Caribbean for the boys? You know what I’m getting at: everyone’s happiest place custom-selected for the needs of the individual.

And that’s all 1.0 stuff. Pre-launch Beta. Let me tell you about what’s in the pipeline.

For one thing, imagine interactive soundtracks. We’ll throw up some time-of-day code in the 1.2 release, that’s easy stuff. Then we start pulling down weather data and incorporating that into the premium soundtracks. Maybe event-based too. Festival in progress? Why not throw in a caribbean undertone?

In the long run, as user adoption upticks, we see a sub-genre of tracks that react to what other users are up to. Who is nearby? Is a crowd forming? The app knows and revises the soundscape accordingly. We’re also looking at a game element — can you follow audio clues and visit all the right locations? Secret soundtracks, unlockable content, all the stuff that makes people crazy with desire.

That’s not it, there’s 3.0 plans too, stuff that’ll change your relationship with sound; military applications, fitness regimens all kinds of things. But before I get to that, you’re gonna need to sign the NDA.