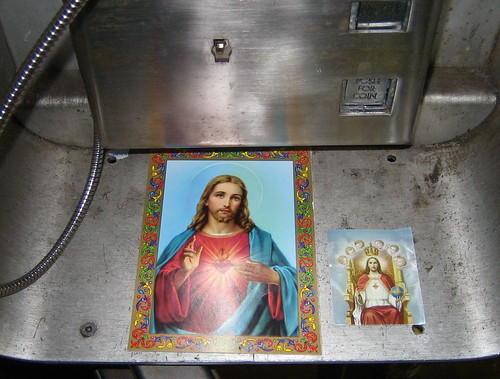 St. Anselm’s ontological proof for the existence of God is outlined in the Proslogion and goes something like this:

He spends most of the rest of the Proslogion trying to work out God’s properties (hint: they turn out to be remarkably similar to those of the Christian God).

What’s the problem with the proof?

The problem is that existence is not a property. If we were going to give the prize for the best cupcake we would not go…

… and declare a tie.

Indeed, you run into a whole host of problems when you start to hand out properties to things that don’t exist. Problems which the tech-blogging industry — in wild defiance of philosophical teaching — seems mostly content to ignore.

Fancy ‘OLPC XO‑3’ becomes the cheapest PC in the world

Finished in semi-flexible plastic, the latest “OLPC XO‑3” similar to the original XO can optimize its display in both transmissive and reflective modes for indoor and outdoor lighting conditions. Presenting an 8.5 x 11 touchscreen, with a little folding ring in the corner for grip and a rear camera, the slim (half of an iPhone) and sleek PC makes use of Palm Pre-style induction charging to remain juiced up anytime, anywhere. The multitouch tablet is slated to be released by 2012.

From The Design Blog (emphasis mine)

The XO‑3 has not become anything aside from a bunch of renderings, plans, and press-releases. It certainly isn’t the world’s cheapest PC. How do I know? Because it isn’t a PC at all. PCs can run software. Try to run software on the OLPC. Go ahead, try to buy one.

More words were probably written about this nonexistent product in 2009 than about all the great hardware that every company not called Apple actually shipped. Google now lists 1.8 million documents referencing “Apple tablet”. That compares to 20,700 documents referencing “Acer Tablet PC”. One of these companies has actually shipped tablet hardware. The other has not. Can you guess from those Google figures which one is which?

From 2009: The year tech blogging died

Absurd questions? Yes. But questions asked with an entirely straight face every time an “x is the yPhone killer” story appears. For example. Another. Or, you know.

It’s an endless stream of “that than which nothing greater can be conceived“s, comparing hypothetical objects with real objects. Speculative design blogs are no better (don’t get me wrong, I enjoy Yanko, I just wish that they’d distinguish more clearly between mock-ups, working prototypes, and shipping products).