The Invisible Infrastructure of Cyborgs 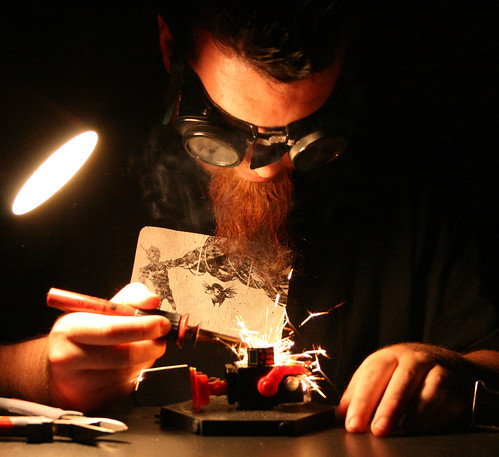 In 4 Jonah poked some holes the Architect half of the division I’d set up. I’d like to spend 5 looking at the Cyborg’s story.

In the first two Terminator movies, Arnold is cast as the classic cyborg, a nearly unstoppable man-machine. Incredibly durable and adaptable, he takes freely from his environment, arriving in the present literally naked and acquiring the equipment he needs along the way. He is supremely self-reliant.

This is the invisible infrastructure of cyborgs.

Sometime in the 90s until 2006, the U.S. Army replaced “Be All You Can Be” with “Army of One”. Advertising for the campaign featured hardcore-looking soldiers with all sorts of high tech gear. The implication being that to join the Army of the 21st century, was to become a stupendous badass. (Sure there was some noise about the “one” being an acronym for “Officers, NCOs, and Enlisted” but who listens to acronyms?)

They certainly are. Consider the infamous Black Hawk Down incident. 18 U.S. soldiers died. Between 130 and 2,000 (that is not a typo) Somalis died. Brutal.

The U.S. Army is probably the most cybernetic military force, in their tendency to prefer increasingly high tech solutions to combat problems.

But a high tech military is supremely reliant on the support staff and logistics that comes with deploying and maintaining the equipment. The logistical operations of the army are dizzying in their complexity. Just getting all of the gear needed into the field is an overwhelming (and expensive) proposition.

The fact is that cybernetic beings can’t be self-reliant. It takes an enormous amount of institutionalized medicine and technology to make a working cyborg. The moment to moment self-reliance of the cyborg can be seen as a kind of infrastructural debt that must be paid back either at another time or by someone else. That someone else can be a willing participant, as in the crew of technicians building and maintaining Robocop between mission, or a victim, as in the hapless bikers who give Arnold the clothes he needs in Terminator.

In the penultimate issue if Warren Ellis’ run on Iron Man, Tony Stark has just taken the Extremis serum and is discovering his new powers.

“Maya, I can see through satellites now,” he says.

Which is all well and good. So long as there are satellites.