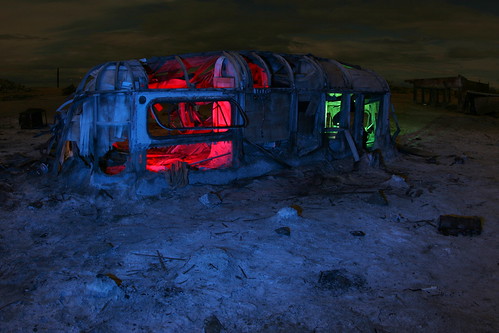 Impromptu guest post! I’m taking the liberty of reposting this comment about 3 by Jonah from still crapulent.

This cyborg-architecture tension relies on defining architecture as a discipline dealing only with static structures, however. I’m (clearly) not up on my architectural theory, speculative or otherwise, so I don’t know to what extent this definition has been problematized, but it seems to me to be deceptive.

Why must we restrict “architecture” only to stationary built environments? Why do we think of the camper van primarily as a vehicle, as opposed to a building? Are there other productive ways of thinking about architecture and mobility? It is certainly relevant to thinking about the architecture of temporary structures, or does it somehow cease to be a matter of architectural consideration when it becomes a collapsable, portable building?

On the flip side, walking houses, floating castles, fortresses on wheels (baba yaga’s chickenleg house, the castle in the sky, howl’s moving castle, etc.) abound in myth, fantasy and sci-fi, but what about modern cruise ships, themselves larger in size and occupancy than the majority of stationary buildings one encounters? Or a space station, which is necessarily mobile, or for that matter, any large (existing or projected) space cruiser? Vessel v. domicile? The Nostromo? The Death Star?

Obviously in ‑many- of these cases there is still the an imbalance in the issue of investment of effort/resources/capital at work, but it hardly applies across the board, or at least applies variably enough as to complicate the dichotomy being set up.

On a non-terrestrial, or further a non-resource-providing plane, need the homesteader not be nomadic?

Originally posted as a comment by stillcrapulent on Quiet Babylon using Disqus.

I still think there is still some room for me to make a parallel between the self-reliant cyborg and nomad v. the infrastructure reliant building-dweller and farmer. After all, most of Jonah’s examples are pretty fantastical. Sort of edge cases for the blurry line between self and environmental intervention.

But I can’t really have it both ways, can I? Not given that I spent 2 calling the extremely nomadic Apollo program an example of architectural thinking.