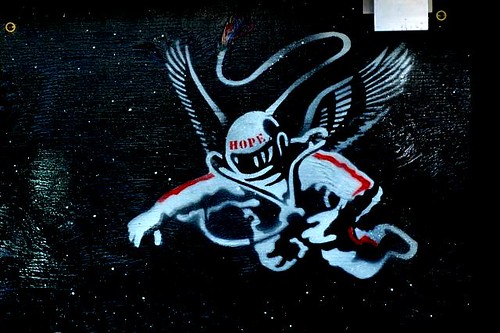 photo credit: KayVee.INC
In the 1960s NASA was still entertaining the idea that humans might actually go to space and, you know, stay. While they were designing and building rocket ships — little bubbles of earth to carry us up — they were pondering an alternative. Rocketships and moonbases are a fundamentally architectural approach to the problem of space travel. What if instead of making a human-friendly environment IN space, we adapted humans TO space? If you make the people more durable, you don’t need to build costly space craft, you don’t need to terraform planets and moons. You can stay as long as you want.

The cyborgs envisioned by NASA don’t look like the chrome gods and monsters of the 1980s. It’s the 1960s and the tools being investigated are plastics and drug regimens. Finding ways to make people breathe slower but think faster. Changing biochemistry to maximize efficiency throughout the organism. Forget food pills and DDT, this was true better living through chemistry.

Meanwhile, in the popular culture, super villains were busy building increasingly elaborate infrastructure to mirror their plans for world domination. Moon bases and volcano bases. Everything is very base-like. These are very cold-war fantasies. Very architectural. You will KNOW we were here because we will LEAVE MONUMENTS (and blow up yours).

Matt Jones points out (click on that link, you won’t be sorry) that this is changing. A lot of today’s villains get by without secret bases. They jump straight to blowing up our stuff without having the decency to build stuff of their own for us to hit.

Asymmetrical warfare is very cybernetic. Every guerrilla needs to be very mobile and adaptable. And what do they do when they strike? They blow up buildings and knock down monuments.

Sure, Al Qaeda has secret cave bases, but the bastards keep abandoning them. These are camp sites. The Nazis had official architecture.