On a Grand Scale

Recap: We’re talking about Alain de Botton’s comment that buildings are forced to sit in silent protest as the people under their care take actions and enter into moods that violate the spirit that the architect was trying to infuse. While this is historically true, we are changing that relationship. Smart buildings will be able to talk back. 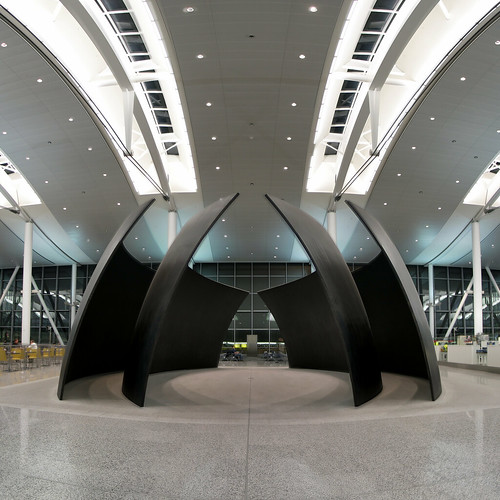 So far, I’ve focused on houses as places where this kind of interactive architecture might take hold. There is no reason to think that it might stop there. If anything, we’d expect large structures — designed to move masses of people instead of individuals — to be the early experimenters in crowd control.

After the planes hit the towers, all kinds of security mechanisms were proposed for airports. Applying facial-recognition to the already ubiquitous CCTVs was a popular idea until it turned out that the tech was not ready. Someday it will be. Forget cumbersome security lines, why not equip the entire building with highly sensitive chemical noses? A network of sensors can cross-reference the movements of travellers, looking for suspicious patterns. A system of bulkheads isolates potential threats until human security can arrive and confirm the arrest.

The airport knows how long you’ve been waiting and by how much your flight is delayed. The building can alter lighting, music and even air content to soothe worried travellers. Nothing dangerous, mind you. Simply a mild sedative to keep everyone orderly. Raising your voice at the check-in clerks? Well, why shouldn’t the building intervene?

Anything that seems like a good idea in an airport will seem fantastic in America’s overburdened, understaffed prisons. Jeremy Bentham’s panopticon suggests a direction. So do South Africa’s armed ATMs. Why put human guards at risk in dealing with unruly inmates?

Schools aren’t precisely the same as prisons, but many of the same discipline issues arise. Hall monitors can’t be everywhere, but the hallway can. Truancy promises to become a thing of the past, there will be no opportunities to loiter in the stairwells. Rumours spread through the student body of a network of tunnels and maintenance rooms behind the walls, unmonitored. Everyone knows a friend of a friend who’s been there. Pranksters are expelled when they hack the fire suppressors one time too many.

In kindergarten, the rooms gently ease the class in and out of nap time. At certain private schools, anxious parents demand detailed positional reports for the teachers of their child. They pour over the data, looking for signs of favouritism, hints that they aren’t getting their money’s worth.

Churches? We are all god’s children, and a place of worship should use every technique available to the maker to help bring the flock to the right state of mind.

Casinos, malls, amusement parks, boulevards, freeways, undergrounds. There is no place in the world that would not be changed by an infrastructure that could talk back. The flavour of conversation will reflect the spirit of the times and the ambitions of the builder.

What will ours say?