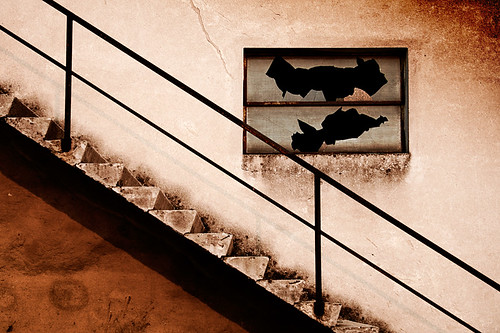 Published as an article in 1982, the Broken Windows theory is the the idea that the little things are what make the difference between an orderly and a crime-ridden city. If you are diligent about cleaning up graffiti and vandalism, then people will be less inclined to cause trouble. Leave damage un-repaired and you send the message that no one cares. And then…

We suggest that “untended” behavior also leads to the breakdown of community controls. A stable neighborhood of families who care for their homes, mind each other’s children, and confidently frown on unwanted intruders can change, in a few years or even a few months, to an inhospitable and frightening jungle. A piece of property is abandoned, weeds grow up, a window is smashed. Adults stop scolding rowdy children; the children, emboldened, become more rowdy. Families move out, unattached adults move in. Teenagers gather in front of the corner store. The merchant asks them to move; they refuse. Fights occur. Litter accumulates. People start drinking in front of the grocery; in time, an inebriate slumps to the sidewalk and is allowed to sleep it off. Pedestrians are approached by panhandlers.

NYC Police Commissioner William J. Bratton was an adherent and applied the idea in his efforts to combat the crime wave that was sweeping New York in the 1990s. Malcolm Gladwell approvingly covered that story, making it one of the pillars of his argument in The Tipping Point. Despite people like Steven Levitt arguing that correlation is not causation, the theory still holds a lot of sway.

So much for the background.

It’s 2009 and the housing market is in free-fall. American resolve, strengthened in the wake of the 9/11 attacks, redirected and solidified by the HOPEful rhetoric of Obama’s new administration is facing its first test. This is not an external challenge, a threat from the outside carried by insidious invaders. This is an internal failing.

Newsmagazines and pundits are proclaiming the End of Capitalism, or at least the need for Serious Reform. Everyone’s trying to figure out who to blame. Insolvent homeowners or the banks who lent to them. Over-regulation or under-regulation. Democrats or Republicans.

There are any number of people who’d like to see the United States fail. Al Qeada and their shadowy financiers, of course. Any of the forgotten domestic terrorists. White supremacists, survivalists, cults, and any number of far-right and far-left organizations. Not to mention the Chinese, Russians or countless James Bond-esque ultra-rich villains.

Somewhere in an office or a cave or a secret volcano base, someone is reading The Tipping Point next to the latest housing figures and a light goes on.

Maps are drawn up, sleeper cells are activated, secret Swiss and Cayman accounts are accessed, and the buying begins. It’s child’s play, really. A matter of ensuring the right density of abandoned housing.

In a lot of cases, the problem takes care of itself. Investment housing that no one actually wanted in the first place, places where no one wants to live. Half-finished bedroom communities and subdivisions. Detroit and the rest of the rust-belt. These areas will devour themselves. Just to be sure, agents buy a few properties for fractions of a penny on the dollar.

Other areas require some finesse. They are generally liveable, often quite nice. Here, it’s a matter of finding the homes belonging to people whose wages don’t match their mortgage payments and who are realizing that their debt outstrips their houses’ value.

It’s very easy to recruit agents to this cause. You don’t need suicidal maniacs, you just need people vaguely in favour of your aims who are willing to pick up the mail from time to time.

Once property is bought, it’s simply a matter of keeping up with property tax payments, knocking out a few windows, and leaving the building to die.

The American system is utterly unable to cope with this attack. The whole rhetoric of the need for things like Fannie Mae and Freddie Mac is built on the assumption that homeowners will take care of their land. Even now, measures are being pushed through to protect homeowners who can’t actually afford their homes.

It’s totally legal. People are buying and selling property through normal channels. There is no investigation because there can be no suspicion. It looks like all the rumours of the end of American prosperity are true. Newscasters inadvertently act as force multipliers, broadcasting reports about America’s Decaying Neighbourhoods. Until it’s not news anymore. Until it’s just the way things are.

Some neighbourhoods do resist. Busybody homeowner associations form a kind of local immune system. They fight the tide, calling meetings, filing by-law complaints and struggling to keep their neighbourhoods safe, clean, and free of strangers. It’s exhausting work, and though some neighbourhoods succeed in staving off the damage, most families (worn down by those rowdy children) simply try to move elsewhere. There is nowhere to go.

It’s an engineered crime wave. As security forces helplessly patrol the docks and airports for dirty bombs and terrorist attacks that will never come, America rots from within.

A glimmer of hope: what if Broken Windows is wrong and the whole attack fails? Then the neighbourhood recovers, prices go up and a weapon becomes an investment. Our shadowy attackers sell the houses back at a tidy profit.