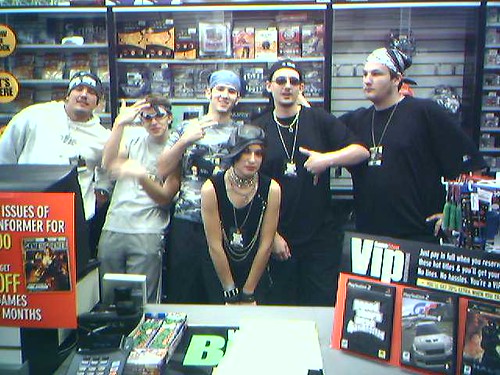 The result has been an entirely rational discussion consisting of game enthusiasts and feminists coming together to form a nuanced understanding of freedom of speech, the troubling depictions of women in violent situations, and the interplay of player agency and creative narrative and mechanics in forming the content of a game along with the shifting line between stereotypes and satire. It certainly has NOT resulted in shrill protestations of innocence by gamers who often fail to even grasp why there is a big deal and even shriller condemnations by feminists, many of whom have never played the game that they are tearing apart.

The problem with trying to find a nuanced middle ground here is that it’s difficult to defend the game without falling back on either the “it’s just a game” or the “well no one HAS to kill a hooker” defenses. Both are disingenuous.

If we believe that video games are an important cultural force (and I do) then when the criticism comes, we can’t back away and say “hold on, it doesn’t count here”. There should be no take-backs. If we think that games have merit then we should be able to defend them on their merit. Grand Theft Auto 4 has a Metacritic score of 99/100. It’s pretty clear that the gaming press broadly agrees that GTA:IV is a good and important game. So it should be defensible as such.

We can’t hide behind “no one has to kill a hooker” or “it’s the players not the designers doing the murder” either. The fact is that any video game is created by a bunch of people and the collective decisions of the developers, publisher (and sometimes regulatory bodies) determines what rules and verbs are implemented in the game. Designers shape the world and decide what can and can’t be done. In GTA:IV, for all its realism, I can’t climb over a wall that’s waist height. At some point during development, Rockstar had a meeting about my character’s movement abilities and “climbing short walls” was left off the list.

Which is just to say that if they’d wanted to, Rockstar could have prevented hooker killing. They could have left hookers out of the game. They could have made it so that the hookers were invulnerable to damage after you’d paid them. They could have had cut scenes as part of the sex act that involved the hooker walking away to safety while the main character dozed in post-coital bliss in his driver seat. They could have made the game’s sanction for killing paid hookers (perhaps a bunch of crazed, heavily armed, pimps) so high as to make the decision untenable. There’s no way that Rockstar was unaware of the controversy around this feature in earlier games from the series, so we can’t argue ignorance or emergent gameplay. Hooker killing is in the game and it’s in there on purpose.

Does this make the game misogynist?

GTA:IV is a game about transgression. Liberty City, as photo-realistic as it is, is not a neutral simulation of the world. Just get in a car (you can borrow your cousin’s), try to avoid committing a crime and you’ll see what I mean. The controls are tuned for high speed chases — it takes real finesse to stay under the speed limit and in your own lane without causing a pileup. Traffic moves at a snail’s pace and you can’t help but gun the engine and blast past all the suckers, careening around corners sending cars, pedestrians, and lamp poles flying. Cars are disposable and easily stolen. A multiple homicide killing spree and police chase can be ended by ducking in to a spray shop to give your car a new coat of paint or simply by laying low for a few minutes out of sight of the cops. You can attack — at any time — anyone that you see. It is far easier to be violent than it is to be law abiding in the GTA universe.

The main storyline tells the tale of a Eastern European immigrant’s rise through the ranks of the underworld, with all the violence of Scarface (the movie) and with the body count of a Mario game (which is to say — a lot). It stars a mostly male cast of racial and cultural stereotypes, though some female characters are present. In order to advance the story, you’ve got to commit a whole lot of crimes.

It also, incongruously, features one of the most robust dating simulators I’ve ever seen in a video game. You meet girls over the course of the adventure, you exchange phone numbers and then you can call them and ask them out. Sometimes, they call you. Once the date is arranged, you can choose to actually meet them, you can call to cancel, or you can just stand them up. Sometimes you have to choose between completing a game mission and keeping your plans. They’ll comment on your car and your clothes as you take them to places you think they’ll like (bowling, darts, cabaret show, drinks) and have awkward small talk with them. You can decide whether or not to go in for a kiss when you drop them off (I haven’t played long enough, but I’m pretty sure that you can’t date rape them, thankfully).

But it is misogynist?

On balance, I think that it’s hard to argue that GTA:IV makes it hard to play a misogynist lead character. As far as I know, there aren’t any male prostitutes offering their services, and you definitely can’t play a female lead (though to be fair, even Deus Ex had to cut the female option because of time and space constraints). There is sex in this game and the sex is clearly aimed at a straight male audience.

That said, it’s easier still to be an equal opportunity scum bag. Of all the people I’ve passed (or run over) on the street, I haven’t identified a single prostitute. The game pulls from criminal and mobster pop culture for its tropes, so the vast majority of the people you will be gunning down will be men. You have to go out of your way to hunt down and kill women. It’s part of the game play but it’s not a core part. There are in-game tutorials on how to date someone properly. You have to work out for yourself (or read about it in someone’s angry or purile screed) that you can hire and murder prostitutes.

The difficulties in talking about games like GTA:IV are legion. For one thing, it’s so big that every player’s experience will be very different. Comparing notes with a friend, I learned that he’d spent a good chunk of time watching his character watch TV. I didn’t even know you could do that. The scope, scale and detailing of the world in which the game happens is astounding.

The biggest reason for any of the controversy around GTA is that it sits on this weird crossroads between a realistic setting and video game ethics. No one is up in arms about the death toll in any of Super Mario Bros, Mega Man, or Final Fantasy despite the fact that the number of flattened Goombas in a single session is APPALLING. GTA takes that ethic and transplants it into a world that looks very much like our own. It’s very easy to stop seeing pixels and start seeing real people, which is why Jack Thompson characterized the games as “murder simulators”.

Cultural commentators see a video featuring the death of two virtual women and get up in arms and the defense, which is “yeah but I killed hundreds of other people too” just takes the discussion on a turn for the worse. Grand Theft Auto IV is probably one of the best games ever made. It’s also one of the most violent both because of the mandatory storyline killings and because of the freedom you are given to prey upon civilians (prostitute or otherwise) whenever the whim strikes you. It’s a fantasy about being able to cause mayhem in the real world and is all the more effective for how real the world seems.

Warren Spector, who is one of the smartest people in game design, sums up my feelings really well in an interview with Gamespot.

I am frustrated that the games in the GTA series, some of the finest combinations of pure game design and commercial appeal, offer a fictional package that makes them difficult to hold up as examples of what our medium is capable of achieving. The fictional context of GTA all but ensures that it will be portrayed in the mainstream press (and, I guess, in the courts!) as little more than a ‘murder simulator’ when it clearly is so much more–if you take the time to look.

Sadly–and this is part of the point I was trying to make in the interview last week–most people won’t take the time to look past the surface, the fiction, the context. They don’t see the fun and the freedom the game provides. They see carjackings and gun battles and hookers. You can talk about game design genius ’til you’re blue in the face. The people who want to regulate games, and the mainstream audience we want to reach, will ignore you. And then they’ll drop the hammer on our medium. Hard.