Murmuration of Malware - An Endless Sea of Compromised Drones

Recently, researchers in Austin demonstrated to The Department of Homeland Security that they could take control of a UAV by spoofing a GPS signal. It’s one of what will surely be thousands of vulnerabilities discovered over time in an ever evolving robotic airforce. UAVs have software. Software has bugs and security problems.

One of the miracles of the modern Internet and a demonstration of how robust the thing is, is that it works at all. The Internet you experience on your home computer and rely on for day to day communication, socializing, entertainment, and business is a thoroughly sanitized and signal boosted edition of the real Internet. The real Internet is a toxic sea of aggressive malware, massive botnets, and countless spam messages.

It’s a riot of measures and countermeasures that has more in common with a primordial oozed of virulent competing organisms than it does with a civilized place for the storage of knowledge and commerce. As if we’d decided to set up a grocery store and library in a pandemic zone.

The rush to put drones in the sky is a rush to suspend computers in the air. While I trust that they’ll be subject to more regulation than their grounded counterparts, you can throw together a flying machine for a few hundred dollars. Those aren’t going to get more expensive as time goes on. What will the countermeasures be for an unlicensed swarm? 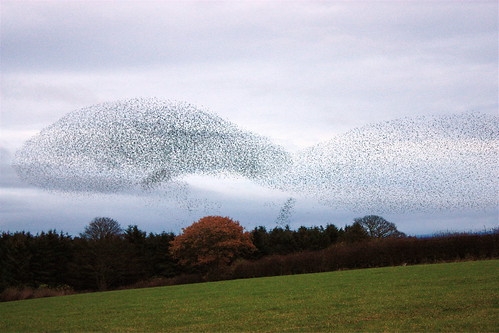 Here’s a scenario: A sky darkened with flocks of unlicensed UAVs, of varyied provenance and security arrangement. A networked ecosystem of machines so throughly hacked and botted that they effectively become a communal resource of aerial bandwidth. Occasionally, the authorities sweep through and calm a particularly nasty riot of sky eyes, but they are as persistent as pigeons and you can’t web drones out of the sky without causing even more havoc on the ground.

The wealthy increasingly choose to live indoors, with glass pedways to ferry them from work to club to home. The ultra-wealthy and ultra-private choose to live in hardened compounds, buying only the most exclusive and fashionable Faraday devices to survive the regular EMP busts they use to clear the air. The papparazzi have countered with EMP resistent camerabots of their own. Many of these have been hacked too.