Give my Robot a Losing Personality

I’m quite taken with BERG London’s Matt Jones’ admonition that AI should be as smart as a puppy (BASAAP). It’s a way of bypassing the uncannny valley problem that plagues artificial intelligence and robot design. It’s a method of avoiding the uncanny valley by making things that don’t try to cross in the first place. AI is going to be weird and break interactions in unexpected ways, so evoke something like a puppy, which we expect to behave weirdly anyway. 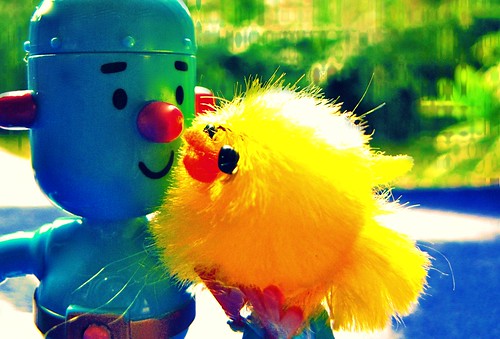 You can see this at work in Pleo, the robot dinosaur. The baby robot dinosaur. Babies are expected to be clumsy and behave strangely. By dressing the toy up in baby skin, bugs become features. Got an erratic walk-cycle? Wonderful. Toddlers can’t walk either. AI have trouble parsing instructions? Well done!

“Aw, it’s just as adorably stupid as a real baby.”

This matters. There is evidence that more attractive interfaces are easier to use. Let’s assume for the moment that creepy interfaces are unattractive. Skipping the uncanny valley doesn’t just make a toy more saleable, it makes the world easier to operate.

Another way of dodging the uncanny valley is to be a jerk. Mark Humphry’s left his chatbot MGonz online one night in 1989. It ended up engaging in a 90 minute fight with an anonyous user.

It’s a stroke of genius because, as becomes painfully clear from reading the MGonz transcripts, argument is stateless—that is, unanchored from all context, a kind of Markov chain of riposte, meta-riposte, meta-meta-riposte. Each remark after the first is only about the previous remark. If a program can induce us to sink to this level, of course it can pass the Turing Test. 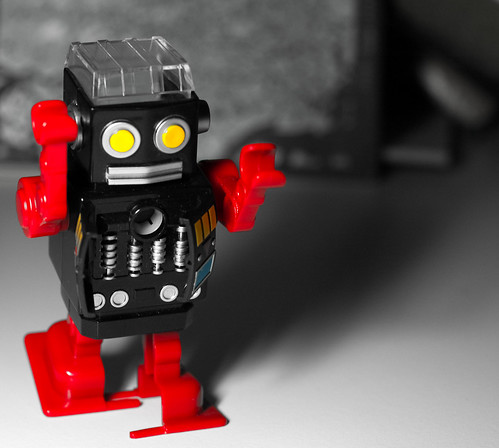 Perhaps BASAAP works for similar (but more adorable) reasons. The clumsiness and distractibility of a juvenile resets the state too, but pulls off the trick of allowing more conversational moves between resets. You can feel like you’re getting somewhere. Maybe you actually can get somewhere. When something goes wrong, that’s to be expected, so you patiently try again, knowing that it’s trying its best too.

Most intriguingly, the directives to BASAAP, or Just Be A Jerk imply to whole fields of emotional landscape for interaction design to explore and exploit. Consider nymphomanic AI or AI that’s high as a kite. What situations are best served by a dismissive personality? When is an uncaring, unlistening father-figure AI called for? Maybe we need a robot that barks orders. What about permanently depressed AI? After all, Marvin the Paranoid Android is quite popular.

Anything other than straightforward, polite, doomed attempts to help.

Those are just creepy.