In the Pearson International Airport in Toronto, there’s a walkway that fascinates me. The walkway in question runs from where you get off the plane to the exit. If you get off the plane and have luggage, you proceed down the stairs to the carousels and the herd of humanity. If you don’t have luggage to collect, you can bypass the whole thing and take this walkway. It passes over the luggage claim area and then passes over the people waiting for their loved ones to emerge. A few meters later, its own set of doors opens and you are outside in a loading area, hailing a cab. Unremarkable. 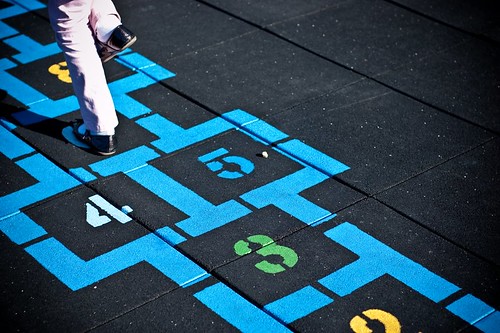 At some point during a 36 hour multi-flight marathon, I have this dim memory of an airport escalator that skipped a floor. There was plexiglass on either side and as we were going from floors 3 to 1, we passed an escalator that ran from 2 to 4. Who was the other escalator for? I have no idea. Probably employees sporting a special badge with chips and magnetic codes that allow them to open certain doors. Doors that I’d be arrested for loitering near, alert levels being what they are.

Years ago, in a philosophy of mind seminar, we talked about abstract reasoning skills. I’m going to mangle it but the basic idea was something like this: Water has no abstract reasoning at all. You can trap water with a bowl. From water’s perspective, the floor is infinitely far away once the bowl has collected it. Animals like dogs can get out of obstacles like a bowl, but you can mess them up with a picket fence. They can see the thing they want to get, and they’ll stay stuck right where it is, barking. They are unwilling to move “away” from the tasty bone even though the open gate down the lane is actually the shortest route from their current position to the morsel. A human is able to make that kind of higher order of reasoning, happily sauntering down the road, popping the latch and collecting the prize. On the other hand, dogs don’t get tricked by lines painted on the ground.

Jackie is smiling at the zoo security guard like she’s not terrified. The guard is yelling something or other.

“Blah blah blah,” he yells. “Blah blah blah blah.” Jackie’s classmates are crowded around him now, watching her. She looks crazy up here, but they’re the ones who think that a little fence like that can stop them.

Joey Comeau One Bloody Thing After Another

Ordinarily, legal and physical architecture work in concert. You aren’t allowed into a certain area, so they helpfully wall it off and lock the doors. They’d prefer you to be in some other area and so offer you bright lighting and wide aisles. But there are times when the two work at cross purposes, either when some architect is being clever (as in the walkway and escalators) or when the subtleties of legal distinction are too much for dumb mortar and brick to implement. I’ve started thinking of these areas as woven spaces.

We start building legal architecture when we’re young. “Don’t touch the floor, it’s made of lava!” “The big comfy chair is ‘safe’!” “No boys allowed!” Chalk, debris, and language are the tools of the budding legal architect. A patch of playground morphs between uses, guided only by a few well placed rocks or backpacks, some lines scratched in the dust, and an elaborately argued consensus.

This kind of rule-making gives us a means to shape our environment when we’re otherwise powerless. We can’t get together a voting block, draw up plans, lobby for, and build a new arena for kids’ hockey, but we can cart a net into the street and declare a manhole cover centre ice.

At the same time, the most prolific legal architects of our childhood are parents and authority figures. Under their watchful eye, otherwise easily traversed spaces become mazes of prohibition and regulation. It hardly seems fair. But these are hacks, allowing layers of use in a single space. Without stern looks and sharp words, it would be impossible to have a usable kitchen that was not also a toddler deathtrap.

As kids mature, the likely uses for a given room begin to collapse into a roughly consistent set of needs. The physical and legal spaces coalesce and begin to operate in concert once more. But even as kids turn into young adults, there are plenty of exceptions. Siblings argue about each other’s bedroom use (“His stuff is on MY SIDE.”), parents and children have to negotiate privacy and access, and politeness constrains what rooms guests do and don’t enter during parties. Finally, there is always the threat of being grounded.

Restraining orders, probation, curfew, and house arrest are legal architecture is literally legal. House arrest ties you to a specific place, imprisoned by purely theoretical walls. Probation offers more freedom but turns the city into a maze customized to your particular circumstances and crime. Restraining orders create roving spheres of forbidden space, a protective bubble around those to whom you have been deemed a threat.

The current technology used for these measures is pretty primitive, relying on phonecalls, eyewitnesses, and crude ankle monitors. It’s not hard to imagine a GPS-enabled or networked monitor that translates rulings into a highly granular set of instructions. According to a schedule negotiated with the courts, virtual pathways open and close to allow you to travel to and from your community service workplace, before sealing you in at home for the night or downtown for your mandated shifts. In the case of restraining orders, the system could monitor the location of all parties, warning victim, perpetrator, and authorities in case of a breach.

If this seems at all draconian, consider that the rest of us are already pretty used to this kind of thing. We happily use theatre tickets, conference badges, time-locked access cards, metro passes, and other tokens to open and close spaces according to all sorts of schedules and regulations. It’s all tricks and hacks. It’s a cybernetic solution to an architectural problem.

Imagine instead an environment built out of some suite of smart materials able reconfigure themselves in a highly contextual manner. Guests checking in to a hotel are assigned a room and then follow a path that lights up at their feet, guiding them to rest. An ancient forest reconfigures itself, trapping and confusing enemies, while friendlies pass unmolested. Adventurers become lost in a dungeon of shifting walls and traps. The entire plot of the movie Cube.