Islands in the Net

This is part of the week-long sprawling Glacier/Island/Storm conversation that’s happening in conjunction with BLDGBLOG’s design studio being taught at Columbia’s Graduate School of Architecture, Planning and Preservation. The introduction and list of participants is available here.

Biologists have identified a pair of complementary evolutionary phenomena relating to isolated populations of island-dwelling animals. Island gigantism happens when birds or reptiles step into the apex predator niche that would normally be held by a large mammal. Because they aren’t as naturally efficient killers as their mammalian counterparts, pressure eases off their prey who can afford to grow larger than normal as well. Island dwarfism occurs when a combination of inbreeding and lacking resources forces animals to grow smaller and consume less, maintaining the balance and viability of the ecosystem.

Which is all just to say that the situation gets weird when you stick things on islands.

View in Google Maps (I highly recommend clicking through and zooming in on the circles.)

Under a Titanium Net

In the Pacific ocean, about halfway between Japan and the Philippines, there is a patch of coral called Okinotori that may or may not include a pair of islands. They might only be rocks. The status of these two possible-islands is of deep personal interest to the governments of both China and Japan. If they’re islands, the atoll grants Japan exclusive economic zone rights over an area of ocean about the size of California. If they’re rocks, then Japan loses the claim. In 2004, the Chinese started calling them rocks. There is no dispute over who owns the atoll, instead the dispute is about what the atoll is.

For those keeping score at home, according to the UN Convention on the Law of the Sea, an island is “a naturally formed area of land, surrounded by water, which is above water at high tide.” Also, “rocks which cannot sustain human habitation or economic life of their own shall have no exclusive economic zone.” There used to be five rocks peeking over the surface of the waves, but erosion has claimed three of them. The remaining pair are barely larger than mattresses, which leaves very little room for habitation or economic life.

To preserve the alleged islands, Japan surrounded them in 60m diameter concrete sea walls (these are the circular structures you can see in the satellite images). The smaller one got a titanium net to protect it from chipping by wave-hurled debris. There are slits in the walls to ensure that the ‘naturally formed’ land remains ‘surrounded by water’.

The entire preservation project is gloriously tautological. A solar-powered unmanned lighthouse, installed in 2007, provides economic life to the islands because they need economic life in order to be islands. An ongoing project to preserve the rocks and encourage new coral growth continues because it’s critical that the islands be naturally formed. A concrete barrier isn’t natural, but a reef grown from transplanted coral in the shelter of artificial structures is.

China might simply need to wait. With sea levels expected to continue to rise, Japan may not be able to grow coral fast enough.

Here’s a fun conspiracy story for you: When the Copenhagen climate talks failed to come to any real conclusion, Mark Lynas blamed it all on China. This led Jamais Cascio to wonder whether the cold war over warming he’d predicted was coming true. Could China be using delayed action on climate change as a kind of passive weather control to drown Okinotori once and for all? Surely that’s overkill.

The fight wages on.

Here’s what fascinates me about artificial islands. They tend to be colossally impractical constructions rendered practical by some byzantine combination of laws and culture. Artificial islands contrast nicely with the woven spaces idea I wrote about last month. Instead of a physical space sub-divided by rules and norms, these are fabrications forced into existence by laws. They are architecture at the margins of the high end, the inverse of Stewart Brand’s beloved slums and Sterling’s favelas. This is real gothic high tech. Expensive, complicated, barely functional constructions that will be abandoned as soon as the winds of finance or international law shift (and they will shift).

Japan spends $600 million encasing coral in concrete and titanium because Chinese diplomats suddenly start calling them rocks. The Chinese start doing this because China is worried that the US Navy might use the surrounding ocean to ferry warships and supplies to Taiwan.

This isn’t Japan’s first foray into making artificial islands. Yesterday’s InfraNet Lab post discusses Dejima, an artificial island built in Nagasaki bay in 1634. The island serves to house Portuguese and then Dutch merchants, part of a strategy for keeping Japan culturally isolated while still allowing for some trade. When Commodore Perry forces an end to sakoku, the island is quietly absorbed into the mainland.

Real estate bubbles render beachfront property untenably valuable. A burst of construction never quite seems to reach the promise of the brochures, be they the incomplete Venetian Islands in Miami (also discussed by InfraNet Lab) or Dubai’s drowning Palm Islands.

In a more contemplative vein, BLDGBLOG points us to an island slowly growing in Montenegro’s Bay of Kotor around a rock that looks like the Virgin Mary. Over time, sailors and pilgrims add ships and stones in a process that feels more organic than the seeded coral around Okinotori but that will survive only as long as Christianity remains in the region.

(For an alcohol soaked vision of the same kind of construction, see Bacardi’s Island commercial.)

In the North Sea, the UK builds gun platforms in order to repel Axis bombers. Once the war is over, they are abandoned, only to be repopulated by pirate radio stations, driven there by broadcast laws and a thirst for pop music. One declares itself a sovereign nation and attempts to run a data haven. (Archinect’s Nick Sowers visited some of these platforms last year.)

At the Edge of the Law

Data havens are a staple of cyberpunk fiction and its offshoots. They’re a natural evolution of offshore banking and flags of convenience, both typically conducted from island nations. It’s a tenuous existence. Many rely on foreign aid and sovereignty is maintained only through the general legal goodwill of the international community. Few island nations could repel invaders so their main line of defence is not being worth invading. At the same time, what makes them attractive places to store one’s money or bits is an alternate system of laws that permit foreign nationals to skirt their own country’s rules. 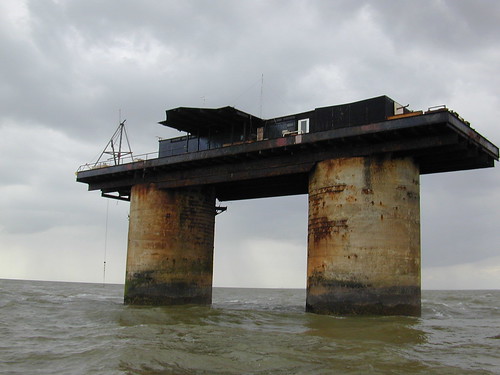 These countries seem to survive on the idea of being a country. Look through their economic activities and you see a bizarre portfolio of enterprise on the edges of sovereignty. Nauru, stripped of its natural resources has tried being a tax haven, renting fishing rights, and hosting an Australian detention centre. Tonga is known for its colourful postage stamps. The Cayman Islands have 285 registered banks. It’s fitting that Tuvalu would end up with the .tv domain, a valuable property that it leases out along with its area code for 900 numbers.

Iceland, still recovering from its law-induced role as one of the epicentres of the financial crisis, seems intent on reinventing itself as real data haven. First, it began pointing out that its low temperatures and virtually unlimited supply of geothermal energy would make it a great place to put your server farms. Now it’s working on readjusting the laws to be much more media-friendly. (A move which may or may not work as intended.)

What lessons in all this for the budding architect? If you’re going to grow your own island, understand how tenuous a construction this is. We live in an era when the natural island nations are at risk of becoming ghost states, let alone their artificial companions, many of which barely crest the waves. Artificial islands tend to be inhabited as briefly as possible, a pressure which conflicts with the relatively slow process of semi-natural growth. You need an egress-plan. What will become of your island when the legal and cultural environment that sustains it inevitably changes? Who will inhabit it after the lawyers, scientists, diplomats, bankers, and soldiers all go home?