When the Future Crossed into the Present

1991 was, for me, the year that the future crossed over into the present. That’s the year that the Robotech storyline was meant to start, and I was big into Robotech. 1991 was the year that a world war would begin, a war that would nearly consume the planet, until an ultra-advanced alien ship fell out of the sky. 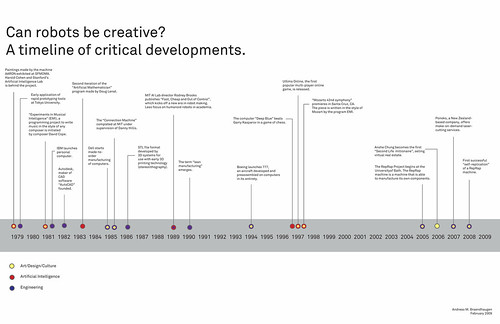 You can imagine my fuzzy trepidatious fear/excitement when my Junior-High self woke up one morning to hear that the U.S.‘d invaded Iraq. I didn’t mention the feeling to anyone, because, clearly that’s insane, but I harboured a secret thrill. Could this be it? Could Jack McKinney be a documentarian? (No.)

Dan Meth created a chart of Futuristic Movie Timelines and the result is instructive. It’s fun to watch these movies, knowing what we now know about the progression of technology. Not so much for the plot — the plots were never predictions — but for the set dressing. There’s two halves to the fun: stuff what’s there that we are missing and stuff that’s missing that we already have.

Both provide object lessons in how hard it is to calibrate visions for the future and serve to remind us that all science fiction is really about the present.