There were a lot of new buzzwords in play in 1999 when I was taking calls for our local Telecom’s ISP. This was 1999, just before the dotCom bubble burst; an exciting time that demanded exciting verbiage. Multimedia. Information Super-Highway. eVerb-of-your-choice.

My favourite was “Paperless Office”. We used to use it as a kind of curse word. An invocation said while waiting for copies of the meeting’s agenda to be printed so that if could be distributed, doodled upon, and then thrown away. 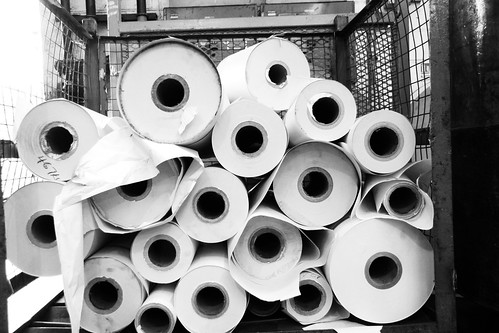 The computer was meant to herald an end to paper documentation but paper multiplied instead. Easy editing + cheap and fast laser printing changed the relationship we had to paper. Real world filing disappeared, as it became easier to just print a new copy if the document had gone missing. Perfection trumped conservation and every discovered typo meant a complete reprinting of all 7 copies of the 50 page report or proposal.

Think about what’s happening here. Documents are undergoing an transition from object to data. The paper copies become physical instantiations of the data but they’ve stopped being the data itself. There’s this sort of adolescent transition in progress, while we — the users of the data — aren’t sure how to treat it, so we end up with these bizarre hybrid entities that slide back and forth between digital and physical, all the while leaving behind recycling bins overflowing with the dead husks of stale snapshots.

A decade later, we’re slowly starting to come to grips with this. Very few of my friends own printers anymore — they feel like a costly burden. We prefer to avoid printing at all if we can, resorting to a trip to the copyshop only when absolutely necessary. The fact that we have to do this at all shows how much of the rest of the world that we’re interfacing with still fetishises paper. So we resort to hacks, using scanned signatures and fax-to-email services to generate much documentation, essentially resorting to forgery to navigate our way through the paper bureaucracy. Adolescence is still in progress.

If all these visionaries are right about the path that manufacturing is going to take, we are in for an even worse transition with objects. Just like with paper, the promise of 3d printers is a blurring between data and objects. Bruce Sterling calls these hybrid things Spimes. Data that gets instantiated in the physical world for a time, before being reclaimed, recycled and sustainably mined for future use.

Scenario: You buy a Spime with a credit card. Your account info is embedded in the transaction, including a special email address set up for your Spimes. After the purchase, a link is sent to you with customer support, relevant product data, history of ownership, geographies, manufacturing origins, ingredients, recipes for customization, and bluebook value. The spime is able to update its data in your database (via radio-frequency ID), to inform you of required service calls, with appropriate links to service centers. This removes guesswork and streamlines recycling.

I think and hope that Sterling is right about the end point, but the transition terrifies me.

Think spam is bad? Fax spam is worse. Object spam will be worse, still. Will be? I should say that it already is. Every time you go to a conference or sales event and come back with a sack full of unwanted tchotchkes that you’re going to toss, you are glimpsing the objectless future. We’re going to be drowning in the stuff. Moreso, I mean.

The problem is fundamentally a materials(marketing?) one. Taken individually, “disposable” and “durable” are each fine selling points. The problem is that over and over, we cram these features into the same stupid objects. The usual culprits — water bottles, disposable tupperware — are all there, but it goes bigger than that. My cellphone has a 3 year contract. When the contract is over, my provider is going to try to sell me a new phone, which will be 4–8x more powerful than this one. I intend to buy it.

Is this a consumer problem? If we started selling cellphones that were designed to decay after about 2 years of use, how would that go over? We’d be run out of town for selling cheap product, I think. There’s a kind of willful blindness. We know obsolescence is planned but if we talk about it, people take their business elsewhere. “I don’t want a phone that’s gonna beak down after 3 years.” YES YOU DO. You’ll want a new one.

There’s a kind of insane packrat mentality to it. “Who knows, I might still want to be running this computer in 8 years, anyone who makes a CRT monitor that falls apart after 3 is a shyster.”

A sane system would build into objects a realistic lifespan and allow them to die gracefully instead of these undead zombie objects that are no longer useful but won’t go away. This is all that cradle to grave design you’ve been hearing so much about.

So we need a better culture around this, we need planning to match practice to match process. We need better materials. And here’s the kicker: to get to that point, we need to throw away the stuff we’re using now.