Full text of “Drone Army descends on New Orleans” Published in NEWStream and syndicated to all ReutAssoc membersites (retrieved December 21 2012 @ 13:34). 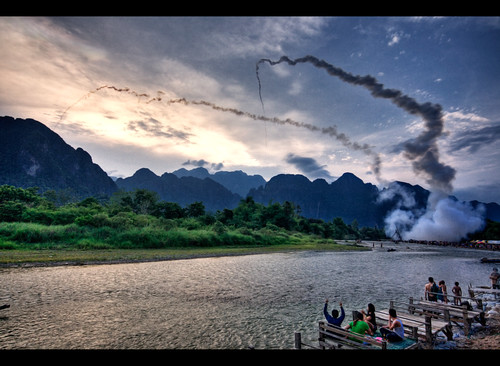 MERAUX, La. — A swarm of drones, known as the “Lost Army,” appear to have established themselves in the New Orleans area, the defence commissioner said. The autonomous force has been operating without human control for nearly a decade.

Three units were spotted by junkyard workers, about 10 miles from where the reconnaissance units were discovered in November, commissioner Baako Arceneaux said Wednesday.

Though the exact nature of the drones remains unconfirmed, goggle imagery provided by the workers matches the profile of constructor-type units.

This most recent sighting was close enough to last year’s location that the drones could have been part of the main swarm. But they might also have been blown ashore by hurricane Quinton or Stephanie, said Arceneaux in a news release.

“Although the full extent of the so-called Lost Army’s presence isn’t known, we have to assume that at least a portion is established in the area and people should be careful when travelling outside, hunting recreationally, or otherwise behaving in what could be perceived as an aggressive manner,” Arceneaux said.

Since the Michoacán incident, the Louisiana Department of Civil Defence has been upgrading surveillance stations along a north-south line through the state and at several key navigational choke-points to monitor for signs of the drones. Critics charge that the process has taken too long and that warnings are coming too late.

“This is just part of a larger failure on the part of the powers-that-be to properly fund national sanctity,” said Corporal J. F. Ruck, Minutemen spokesman, “They’re telling us to just sit back and let the drones fly on by, more of the extensive record of do-nothing politics by the government. We don’t even know where they are.”

Built and deployed to police the Columbian jungle during the height of anti-drug paranoia, contact with the nearly completely autonomous collective was lost 9 years ago. The incident and subsequent massacre of a small unit of Panamanian security forces led to the immediate banning of high-autonomy drone units. The ban has ironically made the errant drones nearly impossible to contain.

“The problem is that our guys just aren’t as fast as these things,” said General Hussein, speaking from the Pentagon, “They do one thing really well and that is high speed 720 degree combat. You can’t expect a human operator to match that capability.”

After two disastrous attempts to retrieve or destroy the drones in South America, a containment policy was declared. However, jurisdictional issues have plagued the joint task force and as much as 50% of the army carrying up to 70% of the remaining ordinance remains unaccounted for. Despite efforts, they have been steadily migrating northward.

According to Lockheed Martin analysts, the drones appear to be in a patrol mode. Since the massacre at the alleged cartel fields in Michoacán, few violent incidents have been reported.

The drones carry a mixture of bio-explosive and conventional ordinance. Experts recommend that anyone confronted with drones disarm and seek cover immediately. People with weapons, home-based laboratories or certain kinds of farms are advised to take special caution. More information is available on the DoCD website.

Don’t miss these top stories on the network:
Opinion: Is it rude to sequence on the first date?
Hurricane Zeke makes landfall in Maine
Plan your vacation: 10 must-see “sunken city” diving tours