The Future is Near

Right at the top of the links blog, I keep a quotation by either Bruce Sterling or William Gibson. “The future is already here, it’s just not well distributed yet.”

I’ve been thinking about this a lot, lately. 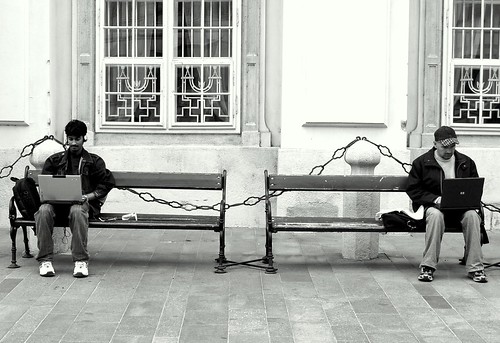 I spend a great deal of time consuming the seeds of the future. I watch TED talks and Seminars about Long Term Thinking and I skim WIRED and Icon and I have RSS feeds out the wazoo of visionaries and cranks and journalists, repackaging their glimpses of the world to come. It’s easy to feel like an outsider, like I’m just on the edge of perception, getting it all third and fourth hand from bloggers re-linking to the online edition of an interview with someone who talked to a bunch of people who have some ideas about the future.

It’s easy to feel like a visionary, too. No matter where you are, there is someone further down the chain, who has not heard the news. Did you know that there are still people who are kind of skeptical about Wikipedia? Not in the healthy “I check the references before making rash decisions” kind of way. But in the fundamental “what do you mean, anyone can edit it?” way.

I met dozens of them last summer at a workshop for teachers interested in introducing technology to the classroom. These were the ones who had bothered to take some time out of their weekends to come and hear us tell them what was coming. Who knows how many of their colleagues there are out there, overworked, underpaid and no time or intention of even trying to sort this stuff out.

As I write this, I’m looking at a guy across the aisle, sitting down with a book wrapped in the kind of loose amateur-looking dust-jacket covering that screams “local library”. The chapter he’s just started has a heading that goes Where Do I Find Blogs To Read?

Think about what needed to happen for this to be the case. He needed to know enough about the Internet to know that there were blogs. He needed to be uncomfortable enough with the whole thing to decide that going to the library and finding a book on the topic was the way to go. The book is probably hopelessly out of date. The time distance from research to writing to publishing to library-acquisition to check-out is not kind to computer books. Yet, this is still how a lot of people try to come to grips with the world. If they even have access to books.

When my friends go to the library it’s for the free Wi-Fi and an excuse to get out of the home-office.

Chris Anderson of WIRED has a chart he likes to show of the media hype for new technology. It charts the rise and fall and rise again from announcement to excitement to disappointment to the slow rise to ubiquity, as the thing gets used in ways that no one expected.

What’s happening in that dip? For the technologies that make it, it’s the slow spread through all of the places that aren’t especially newsworthy, or interesting. It’s slowly seeping out to all of the people who have too many other things on their minds to keep up with every fancy new development.

This is the status quo. Unevenly distributed innovation, pockets of solved problems, and seas of that same problem, waiting to be solved. Repeating other people’s successes isn’t really glamourous. It doesn’t get you on the front page of TIME. But it’s where the lasting work gets accomplished.

So, to Gibson and Sterling’s aphorism, I add the following: We need to back-port the future.

There’s a lot of back-porting work to be done.