AR basics: It’s an extension of the mobile Internet (that’s the one where people are walking around with computers disguised as phones in their pockets). The mobile Internet is what happens when devices become untethered from power, ethernet, and phone cords. 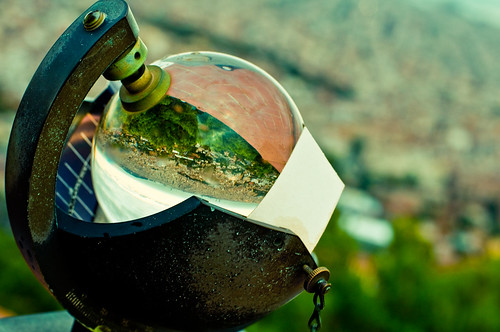 Let’s talk about finding a restaurant.

From the perspective of the Internet, it’s really not that interesting to know where my desktop is. It’s the same place it was yesterday and generally this fact cancels itself out. When I’m at home, a search for “Italian food” looks about the same whether I’m looking for a spot to meet a client for lunch downtown tomorrow or walking distance from my home tonight. So I have to put extra effort into telling the Internet my intentions (using other keywords and the like).

When a mobile like a Blackberry goes online, something important happens. You can’t assume that it’s in the same place that it was last time it connected. As location becomes variable it can become meaningful.

Equip a pocket computer with an Internet connection and GPS and it can start filtering “Italian restaurant” results by how close they are to the searcher. Give it a compass and a video camera and you can point your screen at things and get a video-game like overlay of the world. It can show you all kinds of stuff, such as which restaurants in your view have a 4 star rating or better. (I should note that I hate the overlayed reviews example, but it gets used a lot to illustrate the idea. More on this later.)

The notion is that there is a lot of metadata about the world which is only really relevant to people who are in a particular time and place. If the information superhighway was about bringing vast quantities of data to our fingertips in the home, augmented reality is about carrying that data back out and embedding it in the world. It’s about further blurring the line between the physical and digital. (For more, check out this overview by Will Wiles of Icon magazine.)

This is all in its very early stages. There’s a lot of excitement and money floating around, but we’re still very weak on actual useful applications running on usable devices. The eventual realization of these dreams will require a combination of hardware and software to really work. It’s not yet clear how that will look or behave.

So much for the basics.

As the early engi-pioneers in flooding the physical world with metadata try to sort out how it’ll all work, I’ve noticed a curious process by which these devices are evolving into two distinct branches.

Let’s call branch 1: Things You Keep In Your Pocket. These are the iPhones, Blackberries, Androids and other smartphone-type things. The apps are stuff like Layar and Nearest Tube. Implicitly, I’ve been acting as if these are the only devices. Not so.

When I started writing this, it was a joke post. The title was Lanyards: Official accessory to your augmented reality and I was going to open with with this quip from Bruce Sterling:

I wish designers would stop imagining that customers really really want to carry imaginary geek-junk around their necks on lanyards. We all know that 99.995% of designers would rather be killed than wear a dorky lanyard, so why inflict that on the rest of us?

Bruce Sterling Beyond the Beyond

The joke would have been a string of photos from promotional material of people looking fabulous with near future tech toys hanging from their necks. Stuff like this: So branch 2 is: Things You Wear Around Your Neck, AKA Technology on Lanyards. I’m fascinated by this branch.

(There is also a branch 3: Things You Wear On Your Head, but it’s gone dormant for some reason. It’s possible that through convergent evolution, branch 2 will come to look very much like what branch 3 might have been. Branch 4 is, I suppose, Things Embedded In Other Things. This’ll be when your car’s windshield has data displays glowing at you. Imagine a fighter jet’s HUD and you get the idea. The hold an image up to a webcam apps fall into this as well.)

Right now, branch 1 apps are the most successful. They spread parasitically by running on top of devices that are already popular. There’s a lot of gee-whizery here. They make your boring old phone/computer/thing act like magic. It’s something you can pull out and show your friends. They are socially acceptable, because everyone you know already has a mobile phone.

They are also, for the most part, party tricks.

Take a look at the Nearest Tube demo again. Leaving aside the jittery icons, imagine yourself trying to use that thing to get around. It has arrows pointing you to the nearest stations but those arrows point as-the-crow-flies. You are in a city — in particular, you are in London. If there is one thing I can tell you about the route from your current location to the nearest tube station, it’s that it’s not a straight line.

You are left holding your phone in front of you, constantly adjusting for the turns in the road. Sometimes you have to point the thing up into the sky, depending on where the icon stacking has seen fit to put your particular destination. Compare that to the (suddenly) old-fashioned Maps technique of showing you a birds-eye view of the surrounding area and a turn-by-turn suggested route.

The lanyard devices are quite different from the pocket ones. They are not even a little socially acceptable. No one looks good in a lanyard and if you are the kind of person who moves around much, they are get in the way all the time. They’re uncomfortable. They chafe the neck and if the thing on the end is at all heavy, they cause soreness. They evoke high school coaches with stopwatches and perky tour guides with clipboards.

They also imply a very different mode of interaction than the pocket devices.

Pocket augmented reality tends to being active, burst-use, and private. It uses tiny screens on a personal device. No one else is meant to see what it shows beyond the person holding it. You have to actively decide to take it out and make use of it, and it spends most of its time in sleep mode in your pocket.

In contrast, lanyard augmented reality is passive, always-on, and public. These are fuzzy boundaries, but take a look at a few prototypes and you’ll see what I mean.

I’ve already pointed to Maptor, a GPS device that projects a map of your immediate surroundings onto a nearby surface. Yanko’s pitch for it talks about how useful it is because no one need ever know you are lost. They gets this exactly backwards.

Lost and don’t want anyone to know? Projecting a glowing map will probably blow your cover. You are much better off pulling out your Droid and pretending you are looking at text messages while you find your way.

On the other hand, being able to unfurl a map where everyone in the group can see? That’s something missing from tiny screens. With Maptor, a group of people can gather around and point to the things they want to talk about, taking navigation back to the shared collaborative experience that it was when we had paper maps.

The Vicon Revue is a fish-eyed camera that hangs around your neck and takes photos every 30 seconds. This is perfect for reconstructing whatever happened after tequila number 5 or for self-incrimination at trial.

It’s also perfect for illustrating the passive part of lanyard augmented reality. With a pocket device, you need to pull it out of storage to start using it. You need to decide in advance that there’s something you want to capture. The Vicon reverses that. It’s always recording. Your decision is when to turn it off and, when you get home, what to edit out.

Sixth Sense combines the camera and projector into a kind of mega-lanyard hybrid. Watch the demo here and see if you can feel the difference between that and a pocket device.

In its current state it’s clunky and socially clueless (the best moment is when it projects metadata onto the hapless acquaintance). It’s the kind of thing that only experimental engineers and conference-goers could love. But it’s also a fundamentally different attitude about the world and how the digital should bleed into it.

It’s always running, always scanning, always recording, and always waiting for instructions. Even picture-taking is changed. The act of framing the image you want isn’t taking a picture, not really. It’s telling the device which pictures to keep.

The projector is also very different from the private screen for all the reasons that Maptor is different from Maps on your phone. Other people can interact with the data. When he looks at the toilet paper and his rig tells him it’s OK, his roommate can be standing next to him and seeing the same conclusion. The digital isn’t being edited onto a video of the world, it’s being literally projected into it.

The name of the application speaks to the ambitions of the project. They want something that is so wholly integrated into your life that it feels like part of you.

It’s early days here in the augmented reality field and if the early developers keep making dorky devices, let’s cut them a little slack. After all, the Apple ][ became the Mac.