In 4 posts, we moved from smart homes as haunted houses you can patch to a totalitarian vision surveillance and crowd control. Which, frankly, strikes me as somewhat facile. I mean, it’s not going to be ALL jackboots and mind-control fungus, is it?

A few weeks ago, I talked about this with Snarmarket’s Robin Sloan. He’d been tossing around an idea for a more playful vision of buildings that know what you’re up to. I asked him to write it up. 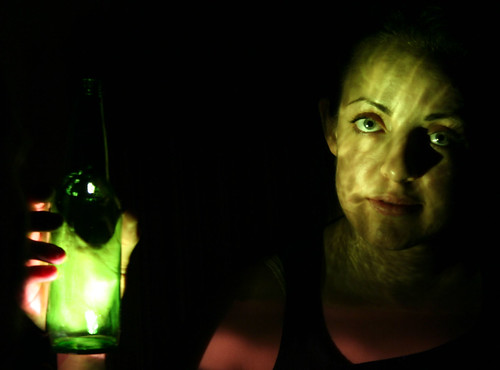 So, this is what it’s like to visit Databar:

You walk in and draw a tiny RFID tag out of a black top hat–there’s one hat for men, another for women. Stick it in your pocket, pin it to your skirt, tie it to your shoelace, whatever. Just keep it with you.

First glance: It’s a plain white space, shadowed to indigo and beige. Throw-lights in Nintendo colors show, by relative brightness, where the men and women are. Over there: a gaggle of girls framed by a bright splash of blue. Opposite them: a row of quiet dudes, talking in pairs, silhouetted in red. Other corners are a violet mix.

Above the bar, the drink menu scrolls and pulses like the NASDAQ ticker. It’s a warm night, and Dos Equis is in demand–almost $6 a bottle now. You could game the market and get a Stella at happy-hour prices. In fact, as you watch, people are doing just that; Stella climbs–$3, $3.50, $4. Little green arrows, just like on CNBC. You could watch those lines rise and fall all night. Some people do.

Later, after two Old Fashioneds (the first is $7, the second $9), the room seems suffused with a golden glow, and there are sparkles everywhere. It’s not the Old Fashioneds. There are chains of white Christmas lights strung all around the bar, connected to a master dimmer. The dimmer runs on a simple formula: (total number of drinks served in the last hour / the number of RFID tags detected in the bar). It tracks the crowd’s collective blood alcohol level, and right now, it’s dazzling.

Projectors spangle the walls with visualizations of the crowd’s ebb and flow. If you’re sharp you can see yourself enter the room, a little pinprick of light that migrates to the bar and back. The looping starling-flock patterns are mesmerizing. There’s one dot that everybody seems to be avoiding. Poor guy.

There are secrets to unlock. If you tag all four corners of the bar in the span of sixty seconds, you’re granted a special power: a cone of darkness. The lights all sense your approach–they sniff out your RFID tag–and dim to nothing as you pass. It’s an anti-spotlight, perfect for whispering secrets and sneaking kisses. It takes about eight powered-up people to cloak the entire dance floor in shadows; that’s when the party starts.

On your way out, you throw your RFID tag back into the hat. Until next time.

I should note that Robin is working on a book. He’s got a Kickstarter project going and the more we pledge, the nicer each of our books will be. Watch his utterly charming video and maybe help him out!