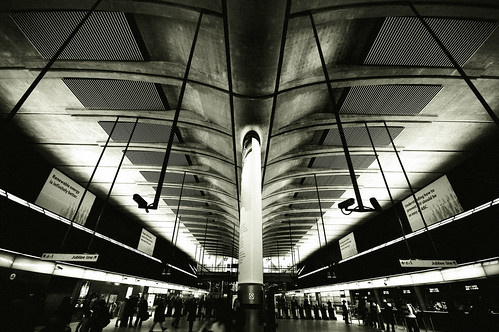 As part of the Cultural Theory program, I took a university course called Cyborgs. This was in 1999 and it was cutting edge to give a presentation with my partner contributing her half through IRC projected on a screen. (It’s the future now, so people project Twitter #hashtags.) It was all very interdisciplinary and one of my classmates was a visiting student from the architecture school.

I don’t remember his name but I do remember his extreme revulsion at the very idea of cyborgs. It wasn’t personal revulsion, it was professional. Architecture — as he understood it — was the process of altering our environment to suit people. Cybernetics was about altering ourselves to suit the environment. The very notion of cybernetics was a threat to his practice and livelihood.

We talked about a lot of other stuff. We considered the portrayal of cyborgs in fiction, the glistening mutilated bodies of countless sci-fi thrillers. We read about the many mundane ways in which we were all already cyborgs, relying on glasses and birthcontrol and other technological interventions to survive and function. We drew in feminist theory and cultural anthropology and whatnot.

Years later, it’s that angry opposition of cybernetic and architectural thinking that has stuck. It strikes me as a useful conceptual tool.