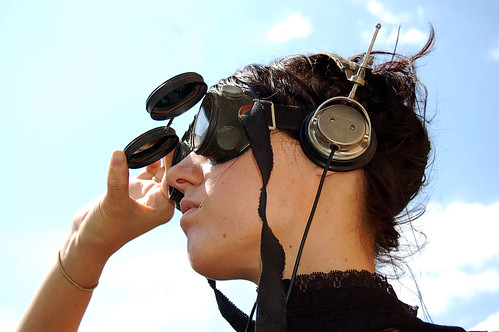 What’s missing from AR is good, cheap, goggles. No one wants to go around with a flashlight on a lanyard Everyone knows this. The solution is under active development. It’s a matter of time before goggles let us overlay images on the world in real time, leaving our hands free to, you know, work.

The promise of AR (aside from sexy maids everywhere you look) is highly contextual just-in-time information. Could be automated, could be an operator looking over your shoulder telling you what to do.

The idea of puppet-master is so centralized. So 19th-Century Crime. The real future is in the automated stuff. What happens when someone makes a Heist Layar? What happens when the getaway portion of the Heist Layar is build on top of someone else’s Traffic Avoider routines?

Distributed, crowd-sourced manuals for a break-in and escape. Researched by shadowy groups with Cayman Island bank accounts, released to the street. Hey mister meth-addict who just pulled off the greatest heist of the century, despite having no plan whatsoever: Need somewhere to launder your money? The manual has some ideas about what accounts you could use (for a fee).

It’s all very user-friendly. You pop on the goggles, plug in the earphones and go to work. There is a bright pathway lighting your way along with a little countdown telling you how long you have to get to the next node. The manual assures you that the patrol times have been precisely plotted. It ducks you into and out of shadows with alarming precision. Red areas outline the vision cones of every known security camera. You can see the gaps and thread your way between them effortlessly. You are wearing the clothes that the manual had you put on and a working counterfeit ID tag (the gear guided you through making that too). There are countermeasures in place, of course, but you’re running a 0‑day version, updated overnight with data from an inside source.

You accomplices don’t even need to be witting. Inject the right instructions into other people’s rigs, have them hold open doors or block traffic to ease the getaway. You can recruit accomplices on Craigslist. Spread a crime across a wide enough range of people and the notion of accessory begins to look strangely outmoded.

“What? I’m just a courier. I got handed a package and I handed it off at the appropriate time. Of course my papers are all in order.”

“Surveillance of the bank? What are you talking about?! I was hired by a company to ensure that their security guards were all making their rounds at the appointed time and to note any deviations.”

“I have no idea what you’re talking about officer, I just answered an ad and did what the rig told me. I thought it was a cleaning job.”

Now, take this tech and give it to suicide bombers.